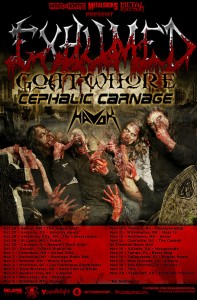 GOATWHORE is hard at work on the follow up to their most successful album to date, Carving Out The Eyes Of God. Once they wrap up recording with Erik Rutan at Mana Studios, they will immediately hit the road for headlining shows starting in Tampa, FL. From there, they will join the Exhumed tour presented by Hails and Horns, MetalSucks and MetalInjection. Support on the tour comes from Cephalic Carnage and Havok. The tour stars in Gallup, NM on October 26th.

Bassist James Harvey comments: “It has been a while since we toured with our friends in Exhumed and Cephalic Carnage. We are looking forward to having some chaos injected nights of wicked metal with them all. Things are going great in the studio with Rutan. He’s a master and definitely brings out the best in us!”

Stay tuned to Goatwhore and Metal Blade’s web pages for video updates from the band while they record the new album!

Goatwhore experienced a meteoric rise in 2010. Their song Apocalyptic Havoc appeared on the soundtrack for Splatterhouse, a video game released for Xbox 360 and PS3 by Namco Bandai, the video for the same song was used in an episode of Last Call with Carson Daly, they toured as part of Ozzfest 2010, and they also toured with Watain, The Black Dahlia Murder and more. Carving Out the Eyes of God, released at the tail end of 2009, was met with praise from fans and critics alike and hailed as one of the best metal albums of the year. Carving Out the Eyes of God broke the Billboard Top 200 chart coming in at #190! In addition to hitting the Top 200 Chart, Carving Out the Eyes of God also debuted on the Billboard Hard Music chart at #33, the Billboard Top New Artist (Heatseekers) Albums chart at #16, and the Billboard Top Independent Albums chart at #34. GOATWHORE also carved out a spot for themselves on Canada’s charts coming in at #48 on Independent chart and #79 on the Hard Chart.