DEVILDRIVER lead vocalist Dez Fafara recently shared an experience about KISS vocalist/guitarist Paul Stanley. Speaking to a fan who asked Fafara to review his band, he unloaded the following story via Twitter:

“here’s why I never give ” My Opinion ” on unsigned bands- one day at work B4 I ever had a record deal Paul Stanley came in YES from KISS and I told him I was in a band called Coal Chamber and we were about to get a deal with RR records . Paul and I will Never forget it said and I quote “Keep Your Job” NO ONE ever makes it big , Only in some rare cases.” !! 2 days later I signed With RR records and never looked back ! So No I won’t give my opinion on your stuff but I will say this ” Stick to your Guns”, Ignore EVERYONE that says ” You CAN’T , Won’t , Or shouldn’t be a musician , and follow your DREAM! Just be careful what you WISH 4 ! O and yea I will say it here and we just played with KISS 6 days Ago ” FUCK PAUL ” it’s all about My man GENE GENE The DEMON Machine ! Practice Play out Couch surf Do anything and all things to make your music see the light of day” 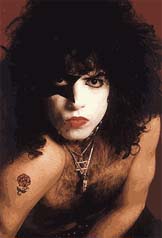