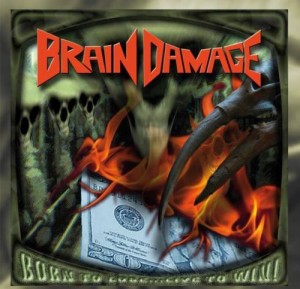 German thrashers BRAIN DAMAGE have released a new full length album entitled “Born To Lose… Live To Win” in 2014. Led by Michael “Micky” Wehner on guitars, vocals and keys, the album kicks off with
“Anarchy”, a track that shows promise, despite Wehner’s limited vocal abilities. You will certainly find yourself gripped by the speeding pace of the music. While He is no Sebastian Bach, let me say that he comes off sounding more like the cheap version of Rob Halford with hardly any high pitched screams delivered, which sucks, because this record could have definitely used that. More screams would have taken it to the next level I feel, along with more guitar solos.

The lyrics are really basic too. Don’t expect earth shattering stuff here, because you will be disappointed. But if you can just get past all of that, I did find myself getting into this album still. The music itself is quite well-written and impactful, thanks to Daniel Buld AKA “Evil Ewald” on drum, Michael “Michel” Lorz on guitars, and Michael “Michäl” Guerra on bass. The next cuts “Terrorizer” and “Bite” do manage to pick up the momentum of the album, followed by track four “Born To Lose”. The album finishes with the tunes “The Fall”, “Shooter, followed by track seven’s hard charging “Arachnophobia” an instrumental, and the final song “Revenge”. This album turns out to be pretty average to me, but I will still be interested to see how BRAIN DAMAGE develops in the future. 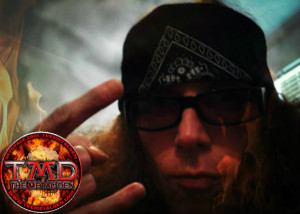