PRIMITIVE WEAPONS – US Tour Kicks Off 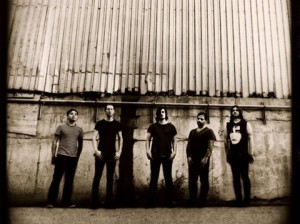 Brooklyn metallic hardcore outfit PRIMITIVE WEAPONS are prepared to embark on their next tour in support of their debut LP The Shadow Gallery. The tour kicks off tomorrow evening in Boston and will pillage its way through the Northeastern and Upper Midwest US states for eleven dates. PRIMITIVE WEAPONS will co-headline the trek with Calgary’s metallic sludgesters Mares Of Thrace and Providence’s doom troupe Pilgrim. Following this set of dates PW will branch off for two newly booked shows in Minneapolis and Fargo alongside Gay Witch Abortion, Blackthorne. The band have also been confirmed to support Long Island hardcore heroes Vision Of Disorder at a Brooklyn gig in November, and will continue to announce more live appearances in the coming weeks.

The seven churning, expansive tracks on PRIMITIVE WEAPONS’ debut LP The Shadow Gallery cover an incredible amount of territory and engage the listener with crushing grooves and empowering swells, showing fans of forward-thinking metallic hardcore and free-form metal what the band is all about. The album was released in March via Prosthetic Records as the band stormed SXSW 2012. Since its release into the public The Shadow Gallery has amassed praise from fans and media outlets across the globe, the band touring regionally throughout the Northeastern states.

Stream The Shadow Gallery in its entirety VIA BROOKLYN VEGAN.