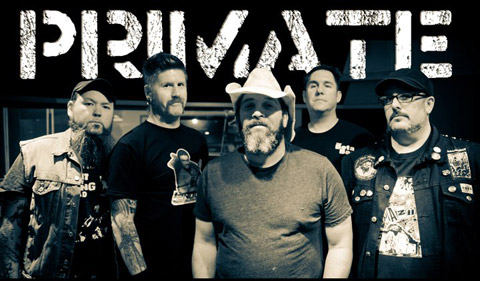 Atlanta’s PRIMATE have just confirmed a local release show to unleash the beast to their local hordes. The quintet will antagonize Atlanta’s most raging metallians this Friday, August 3rd at an in-store performance at local indie shop Criminal Records. Doors for this FREE SHOW are at 7pm; Be there, or suffer the consequences… of missing a seriously sick show. The members of PRIMATE will be available to sign records and meet fans following their set. Full info for the event is posted HERE.

Stream Draw Back A Stump in its entirety at PRIMATE’S BANDCAMP PAGE.

PRIMATE’s grind-infused hardcore punk ruckus brings the relentless spirit of the genre’s pioneers like Poison Idea, Doom, Bad Brains, Napalm Death and Discharge into the modern age with super slick and thunderous production and a foundation-leveling sonic beating. Formed by vocalist Kevin Sharp, bassist/vocalist Dave Whitworth, drummer Shayne Huff and guitarists Bill Kelliher and Mike Brennan, the band disbursed a 1000-run CD pressing of Draw Back A Stump on their own last year. Shortly after, they joined forces with Relapse who are now preparing to officially release the remixed and remastered version of the album worldwide in all formats, featuring three tracks not on the original release.

“…an album that could line up well on the skate ramp boombox along with Minor Threat, Government Issue and Millions Of Dead Cops… If you like punk and grind, this album is pretty much mandatory. Did you really expect something involving members of both Brutal Truth and Mastodon to suck?” – Decibel

“…these veteran players deliver a scorching new effort, chock full of blazing punk-rock-flavored, d-beat-induced grindcore that is fresh and exciting while giving nod to the glory days.” – Blow The Scene

“…a hardcore record that is distinctly traditional, while still making occasional nods at all manner of more recent advancements… 4/5” – Heavy Blog Is Heavy