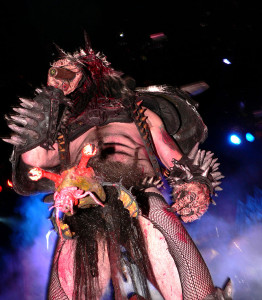 Den Headz, today would have been late GWAR frontman Dave “Oderus Urungus” Brockie’s 51st birthday. His bandmates have now spoke of moving forward without their late frontman, who passed away this year on March 23. You can read their statement and catch them on their fall tour.

“2014 has been a trying year for Slave Pit, Inc. Our first major milestone after the passing of our leader and mouthpiece, Dave Brockie, was our annual GWAR B-Q. While the entirety of GWAR could have just hung up our rubber swords, we decided to charge forward. Our fans wouldn’t let us walk away, and your outpouring of support fueled us. 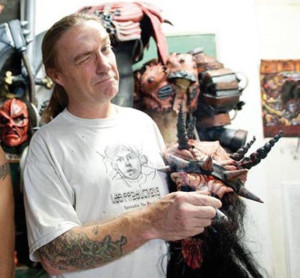 The GWAR B-Q, like GWAR itself, came from humble beginnings. We just wanted a place to hang out with our friends and fans. It belongs as much to you as it does us. Over the years, it has grown to epic proportions. Now that the 2014 GWAR B-Q is over, we look back at a truly amazing event.

We each put our unique fingerprints on the GWAR B-Q to push it to fruition, and we’re extremely proud of how it turned out. That’s not to say everything went off without a hitch; but we’re listening to your feedback and trying to get better as the GWAR B-Q gets bigger. We sincerely hope you had an awesome time. We do this for you.

From start to finish, the GWAR B-Q was a chaotic maelstrom of hard-hitting fury. Every band that took the stage – in what was by far our best lineup – delivered crushing performances to a rabid throng. The people behind the scenes, along with our sponsors and vendors, went above and beyond the call of duty. We owe them sincere thanks. Even the weather cooperated.

Last but not least, we want to thank our dedicated fans who showed up in record numbers to party with us! 5,000 of the world’s craziest Bohabs, packed into a freaking waterpark, rocking out and drinking all the GWAR Beer we had…How kick-ass is that?! We can’t wait to see you all again on the GWAR Eternal Tour this fall.

GWAR’s latest album release was 2013’s slamming “Battle Maximus”. Here’s what Randy “Rocket’ Cody of TMD had to say about it:

“They waste no time at all jamming out their comedic punk-pissed antics on the opener tracks “Madness at the Core of Time” and the over the top rocking “Bloodbath”, which has vocalist Dave Brockie (Oderus Urungus) shouting, “I saw a dead body on the side of the road.”