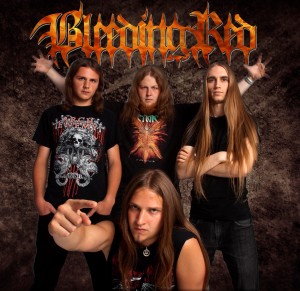 The German blackened death metal outfit BLEEDING RED is currently working on the follow up to their debut album “Evolution’s Crown” from 2012.

After long wrangling the band was finally able to get to an agreement with their former record company and start with the songwriting for the new, yet untitled album.

“It’s done! After a long and sapping struggle we have managed to exempt from our previous record company and are finally ready to go about a new album! We’ve got a couple of songs done in their basics and are already excited about what this new era will bring!”

“Evolution’s Crown” was released in March 2012. The album is now available again in the band’s online shop!

BLEEDING RED from the scenic town of Spraitbach (Baden-Württemberg) were brought to life in 2006. With an extravagant mix of pretty much everything the hard music scene has to offer, BLEEDING RED create their very own sound, which is defined by a demonic atmosphere, brutal riffs, melodic lead guitars and lightning-speed double kick drum storms. BLEEDING RED manage to meld their various influences into a blackened death alloy that is hard as iron, turning each one of their concerts into a raging inferno. After a self-titled EP (2008) and the “Unmaster” demo (2010), the band released their full-length debut album “Evolution’s Crown” in 2014, which earned high scores in the music press. In 2013 the limited live DVD with footage from Summer Breeze and Party San Open Air was released.