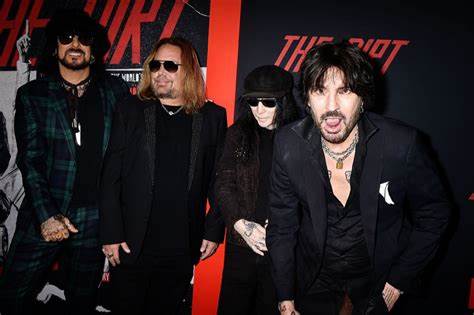 TMD has been tipped off to some of the working titles for new MÖTLEY CRÜE songs that bassist Nikki Sixx is currently working on. Fans will recall that Sixx recently confirmed via an interview with Yahoo that he is writing new tunes that sound like early Motley.

Yesterday, Sixx posted a tweet that got fans really excited when he stated that he is off to do some “work” and “things are heating up.”

About the new tunes, here’s exactly what Nikki said:

“Yes, the new music I am writing sounds like the first Motley Crue album.”

The Crue has twice postponed the infamous “Stadium Tour” citing Covid-19 as the reason, but Sixx promised fans that they will not postpone it a third time, despite the fact that mostly all major concert events in America are now being pushed back to 2023.

Today a leaked photo from the Crue’s songwriting sessions was emailed to TMD. “Return of the Saints” and “I drink, You bitch” are among the working titles.

As the story goes, everyone in the Crue is frantic at work currently holed up together at an undisclosed location, preparing for what is planned to be the final record released by the legendary glam metal band, which, believe it or not, is tentatively slated for a 2023 release, in conjunction with a full-blown world tour around summer of next year. The good news is that countries outside of the U.S. are starting to ease up on strict pandemic restrictions, including even vaccine and mask mandates.

However, because the BA.2 subvariant of Omicron has continued to spread at an alarming rate among Americans, it’s difficult to say whether or not harsh restrictions on ‘larger concert venues’ in the USA will continue later this year or not. It seems that heavily crowded ‘general admission seating’ (generally located behind the fans who are actually in high paying seats, where these concertgoers are pushed into a packed area so that everyone is basically standing right next to one another) makes getting ‘safe distance’ between audience members impossible to achieve. Hence, from a public health standpoint it is the main sticking point.

Producer Bob Rock is rumored to be helming the band’s final production, per a source within Crue’s camp. Rock of course having worked on the band’s classic 1989 Dr. Feelgood album plus most recently in 2019 on the soundtrack for the Netflix film titled THE DIRT. Beyond the title track, The film’s soundtrack would feature three new recordings, all produced with longtime collaborator Rock: “Ride with the Devil”, “Crash and Burn”, and a cover of the Madonna song “Like a Virgin” Rock is easily the best man for the difficult job. The Crue have not released a full-length studio effort in 14 years. 2008’s Saints of Los Angeles was the first full-length studio album with the band’s original lineup since 1997’s Generation Swine.

It’s funny to think that many of the kids who will attend the Crue’s comeback concerts this summer were not even born yet when “Dr. Feelgood” released.

The bottom line is that the actual ‘original lineup’ of Nikki, Mick, Tommy and Vince, has only dropped 2 full-length albums total in the past 25 years!!!

According to Ticketmaster’s site: “General Admission (GA) refers to seating or standing areas that are not assigned or reserved, and are occupied on a first-come, first-served basis. When purchasing tickets for a General Admission (GA) event, you may be quoted section, row, and seat numbers, however these are for inventory purposes only and do not reflect any actual seating location.”

Vince is scheduled to perform with MÖTLEY CRÜE one day before the Red River Valley Fair, on July 15, in Cincinnati, Ohio at Great American Ball Park and again one day after the West Fargo gig, on July 17, in Milwaukee, Wisconsin at American Family Field.

For more information on the latest going down in Crue’s camp, listen to a new episode of Rock And Roll Death Brigade podcast via Spotify, hosted by acclaimed rock journalist, Randy “Rocket” Cody.