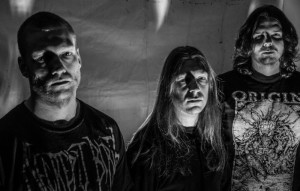 Comments the band: “We’re extremely excited to announce that UNBREAKABLE HATRED signed a multi-album deal with Unique Leader Records! We are looking forward to working with a label that has stood the test of time while continuing to expand their diverse death metal roster. We are honored to be a part of the Unique Leader family and we are ready for what is coming up. With our team behind us, we can’t wait to see UNBREAKABLE HATRED grow.”

Forged in 2008 by guitarist Philippe Drouin, his drummer brother Dominic and vocalist/bassist Simon B. Lapointe, UNBREAKABLE HATRED spews forth a mutinous amalgam of oldschool death metal brutality, modern technical wizardry and blistering groove making for relentlessly visceral sound expedition. The band released their debut full-length, Total Chaos, in 2011 via Galy/Lacerated Enemy Records. Largely underrated but no less scalding, Sea Of Tranquility noted, “UNBREAKABLE HATRED… play a brand of technical death metal and grindcore that is as brutal as it is catchy,” further crowning it, “an all-around solid affair that shows plenty of promise.” In a 4/5 rating, Sputnik Music applauded the band’s versatility. “Rather than remaining excessively tethered to a single structure, Total Chaos often has varying time signatures between the instruments that resonate well when meshed just right — particularly the rhythm guitar and the drums — and that the band pulled this feat off and still have a sound structure just screams skilled.” Added Bravewords, “Fortifying the link between Dying Fetus, Cryptopsy and The Last Felony, UNBREAKABLE HATRED is one of Quebec’s latest new hopes, the group a feat of technical death worthy of some sort of engineering degree… Total Chaos is a record built on supreme musicianship, attention to detail and a steely determination to impart its will while crawling through the haze of the multitude.”

UNBREAKABLE HATRED will release their sophomore full-length via Unique Leader Records later this year. Further info to be announced in the coming weeks.

Words from the converted:

“UNBREAKABLE HATRED is one of Canada’s premier death metal acts; this trio of power lays waste to the listeners ear drums on every level and then some!” – Terrance Hobbs, Suffocation

“UNBREAKABLE HATRED blew us away each night with their energy and ripping songs; it was a total pleasure to have them on our tour and the best is most certainly to come – Ferocious!” — Jason Netherton, Misery Index

“UNBREAKABLE HATRED from Quebec are definitly one of the new bands out there to be recognized! Once again proving that Quebec musicians are on top of their Game! ” — Flo Mounier, Cryptopsy