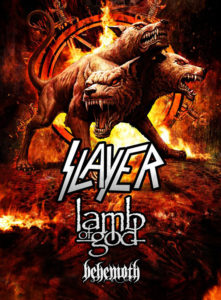 The previously revealed SLAYER North American summer tour with Lamb Of God and Behemoth has now officially been announced and dates/venues confirmed.

“As metal tours go, this is the one that your fellow metal heads will be bragging about if you miss it!” says Slayer’s Kerry King. “Not very often I get to go on tour where we are all friends to start. That being said, the potential for greatness at these events is mind blowing. I look forward to being a part of it, and hanging with old friends – bands as well as fanatical fans! Let the festivities begin!!”

Here is the schedule: