Miami, Florida’s SHROUD EATER will release their two-song EP, Face The Master, April 7th, 2015 on regular and special-edition cassette via Primitive Violence Records & Visual, as well as a digital download. Today, The Obelisk, who praise the return of Shroud Eater in a glowing review of the new EP as well as a retrospective of their past work, is hosting a premiere of the title track’s Stephen King-inspired video. Give it a watch, and ask yourself: Is your faith enough?

Watch the video for “Face The Master” at THIS LOCATION.

In celebration of the EP’s release, the band will also be embarking on an eight-day trek up and down the east coast in support of the release. 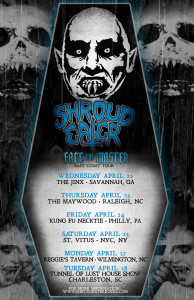 Dubbed by Heavy Planet as “stoner-sludge titans”, and described by the Miami New Times as “archaic sounding sludge-metal with a touch of Motörhead and a heap of witchcraft,” brooding Miami riff sorcerers SHROUD EATER continue to deliver crushing alms to the altar of heavy. Their newest two-song offering, FACE THE MASTER, which was recorded by Davin Sosa and Aric Meerbott at Guzu Recordings, Miami, Florida and mixed and Mastered by Jay Matheson at The Jam Room in Columbia, SC, is a face-ripping romp in vicious tones, gritty vocals, and unexpected turns that have come to define the scuzzy Shroud Eater sound. Riding high off 2013’s highly acclaimed EP Dead Ends and re-energized with a new lineup, Shroud Eater has borne comparisons to metal behemoths like Kylesa, High on Fire, and Acid King, all while forging their own dynamic sound in the metal landscape.