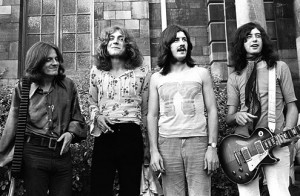 TMD has obtained what Rock N Roll historians are calling the holy grail for LED ZEPPELIN fans: a rare studio outtake – recorded during their first month of existence – of the lost classic cut entitled “Baby Come On Home”. This audio is making its debut on YouTube.

This outtake comes from an old master reel that was found labeled ‘Yardbirds. October 10, 1968’.

As the story goes, the song was originally recorded for the legendary act’s debut album, but somehow turned up missing and was not found again until it was located in a trash dumpster outside Olympic Studios in 1991. In 1993, it would be mixed by Mike Fraser and included as a single in the official Led Zeppelin Boxed Set 2.

The act’s trademark ‘bluesy-soulful sound’ is truly stamped all over this early gem, which was originally cut under the title “Tribute To Bert Berns”. Zeppelin wrote it in honor of the American songwriter and producer who died in December 1967.

Listen to the historic recording HERE!