GHOUL – To Kick Off Tour Later This Week 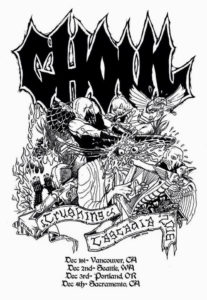 Creepsylvania’s favorite masked miscreants GHOUL will rise again and take to the streets for four special performances later this week in Vancouver, Seattle, Portland, and Sacramento as well as a stint on the Third Annual Another Death Angel Christmas Show December 16th with additional live incursions in the plotting stages. Prepare for bodily devourment.

Team GHOUL continues to tout the wares of their delightfully deviant Dungeon Bastards studio offering. Released via Tankcrimes this past July, the record consumed Billboard Charts upon its first week of release debuting at #11 on the Heatseekers Chart, #13 on the Top Vinyl Albums Chart, #13 on the Hard Rock Chart, and #27 on the Independent Albums Chart.

As if that wasn’t enough to validate GHOUL’s collective awesomeness, the band earned the #19 spot of Decibel’s Top 40 Albums Of 2016, the revered rag issuing of the album, “For those who lived through Nancy and Ronald, S.O.D. and D.R.I. GHOUL’s sound is like finding a shoebox of discontinued candy, all of it fresh to eat. That said, the gonzo midnight movie vibe and cartoonish energy on Dungeon Bastards perfectly articulates the apocalyptic anxiety that we’re all sharing in 2016.”