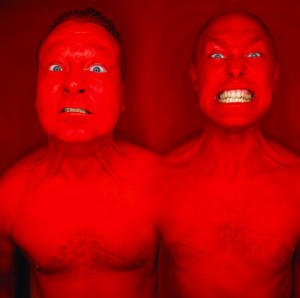 FOSSILS’ succinctly pulverizing Flesh Hammer is packed with ten precise, noisy, no-bullshit pieces of instrumental noise rock in twenty minutes, produced by Danish sound-enigma Q (Beta Satan, Entombed). The past several weeks saw FOSSILS careening on a rambunctious pre-release propaganda campaign which included virtually giving the entire album as in-studio videos one-by-one, as well as the release of a video filmed in an abandoned factory in Philadelphia after midnight where the band and album names were laser-etched onto a slab of beef jerky. Now, for their final swindle before the dropping of the Flesh Hammer, the entire album has been carved up and served over at No Clean Singing in one big old family-style helping for all to gorge upon, the open-all-day purveyor noting of the platter, “Fossils do create skull-splitting grooves, but they also generate a storm of hornet-swarm riffs that veer from feedback-drenched cacophony to some seriously spine-shaking rock ‘n’ roll. It’s more than slightly unhinged – it’s rude, raving, and radioactive.”

Leave your utensils behind; get your hands dirty and feast on the Flesh Hammer right now, RIGHT HERE.

The release Flesh Hammer will be celebrated with two Danish release shows, at Radar in Aarhus on February 28th and at Beta in Copenhagen, on March 1st. In the unconventional spirit of FOSSILS, these will not simply be “typical” release shows with the usual canapés and support bands, but instead an overload of awesome musical guests will be involved in each of the performances, not at least at the Aarhus gig where the program is quite overwhelming. Aarhus will see the resurrection of FOSSILS’ old band, the local high-octane rock n’ roll heroes, Studson playing a sweet set of oldies but goodies. Then FOSSILS will mutate into their own doom version, Slissof, covering an old Cola Freaks-classic with several guests from Cola Freaks, Rising and Studson. Hereafter, FOSSILS will perform Flesh Hammer from beginning to end, and finally the dynamic duo concludes the show when joined by numerous vocalists such as Jacob Bredahl (The Kandidate, ex-HateSphere) and Kim Kix (Powersolo) who will interpret various FOSSILS compositions from earlier releases. In Copenhagen FOSSILS will play a more straight-up set and special guests will be the aforementioned Studson and new local rock outfit, Weak.