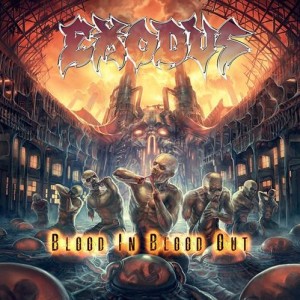 San Francisco Bay Area thrash metal veterans EXODUS will release their tenth studio album, “Blood In Blood Out”, in North America on October 14 via Nuclear Blast. The album art (seen above) was illustrated by Swedish artist Pär Olofsson, known worldwide for his incredible renderings that have graced the covers of countless heavy metal albums, including EXODUS’ “Let There Be Blood”.

“When I was working on the record, I was sitting around watching TV series like ‘Gangland’ and all these locked-up prison reality shows,” says EXODUS guitarist and main songwriter Gary Holt. “And I thought, ‘Yeah, that’s like EXODUS.’ It’s a brotherhood. You bleed to get in, you bleed to get out.

“I’ve been doing this kind of music since I was a teenager, and I’ll be doing it ’till I can’t physically do it anymore.”

The concept for the art was impressively envisaged by Olofsson based on the album title alone, as Gary Holt explains: “The concept came from Pär Olofsson. I fed him the title and he immediately came up with the final concept, and it’s perfect! One of my favorite covers we’ve ever done and it fits the title and theme to a T!”

“Blood In Blood Out” is EXODUS’ first album since the departure of the band’s lead singer of the past nine years, Rob Dukes, and the return of his predecessor, Steve “Zetro” Souza, who previously fronted EXODUS from 1986 to 1993 and from 2002 to 2004.

“Blood In Blood Out” track listing:

“Blood In Blood Out” features a guest appearance by METALLICA guitarist Kirk Hammett on the song “Salt In The Wound”. “It felt really casual, really cool — just like it did back in 1980 when we were all just hanging out back in the day,” Hammett told RollingStone.com. “Me, recording a solo on their album was a huge thing for me. Other than the EXODUS demo that’s been heard by a lot of people, it’s the only time I ever recorded with EXODUS. It was a huge thing for me.”

He added: “I play a pretty cool solo, and then Gary comes in and plays another solo, and you know what? I listened to that and thought, ‘Wow, it’s 1982 all over again and here we are, Gary and I are trying to cut each other’s heads off with our guitar solos.’ Nothing has changed much in the last 30 years. I love it. I love those guys. I’ve only known them for most of my life, so I’m really happy that I finally got to record with them.”