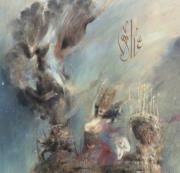 Thrash-inspired Doom Metaller’s Castle will release their second album “Blacklands” on September 11th on their new North American label Prosthetic Records. The band commented as follows: “We are proud to announce that Castle’s dark vision has found a home with Prosthetic Records in North America. They are a label that looms large in metal and are as diverse and committed as we are to bringing original great music to legions of metal fans everywhere. With their help we look forward to doing just that with ‘Blacklands’.”

Castle were formed in 2009 and released their debut album “In Witch Order” via the German label Van Records (The Devil’s Blood) in the spring of 2011. The album brought light to the newly formed band and gained them the title of Metal Hammer Norway’s album of the year as well as Roadburn Festival’s “Newcomer of the Year.” The band has played with the likes of Blood Ceremony, Witch Mountain, and will perform later this month with Hammers of Misfortune and Gates of Slumber. The band consists of Elizabeth Blackwell on Vocals/Bass, Mat Davis on Guitars/Vocals and Al McCartney on Drums.