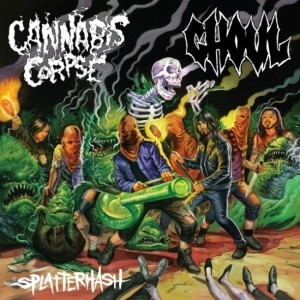 Get ready to fire one up to the soothing torrent of “Shatter Their Bongs,” packing a bong-bastic surge of lung-blackening auditory intoxication from red-eyed riffmanglers, CANNABIS CORPSE. Harvested from their impending Splatterhash split with GHOUL, the second of CC’s two tracks on their contribution of the co-release, “Shatter Their Bongs” is the first from the band to showcase the lungpower of bassist Land Phil (Iron Reagan, Municipal Waste), and is now being passed around over at the Cvlt Nation camp.

Get tore up from the floor up with “Shatter Their Bongs” RIGHT HERE.

With two tracks from both acts, the Splatterhash split will be made available via Tankcrimes on January 7, 2014. Preorders for the LP and more can be obtained HERE. Also, get cranked to the badass Tankcrimes commercial RIGHT HERE.

The masked legion known as GHOUL are mutants from Creepsylvania specializing in the execution of bone-snapping splatterthrash, grave robbing, flesh devourment and a variety of gory nighttime rituals. For their portion of the split, the band returned to Earhammer Studios in Oakland, California where they also recorded Transmission Zero and Splatterthrash. GHOUL will co-headline the first annual Black Sky gala on December 14th, 2013 which features Dying Fetus, Exhumed, Speedwolf, Power Trip, Mammoth Grinder, Call Of The Void, Weekend Nachos, Iron Reagan, Primitive Man and more.

CANNABIS CORPSE, who recently joined the Season Of Mist roster, is a marijuana-themed death metal assault from Richmond, Virginia. Featuring members of Municipal Waste and Gwar, the crew prides themselves in their exceptional knowledge of good green, face-raping riffs and death metal parodies. CANNABIS CORPSE recorded at Land Phil’s own Blaze of Torment Studios in Richmond, Virginia. The completed slab was mastered by Dan Randall at Mammoth Sound and Santa Cruz, and features cover art by Andrei Bouzikov (Municipal Waste, Skeletonwitch, Toxic Holocaust).