Den Headz, Ronnie James Dio’s public memorial service was held this past Sunday at the Hall Of Liberty at Forest Lawn in Los Angeles. Dio was honored by hundreds of family, friends and fans, who all turned out to pay their last respects to the late metal great.

Fans were able to view the service on TV monitors outside, while inside, Dio’s relatives and close friends paid tribute to the music legend, who succumbed to stomach cancer on May 16 at the age of 67.

Dio’s cousin and ELF bandmate, David ‘Rock’ Feinstein, told those in attendance: “He touched all of us with his music and his message and his magic. I know that Ronnie truly loved all of you. He had a great appreciation for your loyalty. I’m talking about all you out there, all the fans.”

American metal act KORN have unleashed the video for their song “Oildale (Leave Me Alone)” online. The track is from their upcoming album, Korn III: Remember Who You Are, which is slated to hit the streets June 29th through Roadrunner Records.

Watch the video below!

Canada’s BARN BURNER has scheduled some dates overseas this summer. Here are the confirmed European shows:

Finnish metal act BATTLELORE have issued details on their next record, including that they’ll be working on with Dan Swanö:

“We will begin the recordings of our next album in early June at Sound Supreme Studios (FIN) with Janne Saksa, who will engineer and produce the album. The legendary Dan Swanö will do the mixing and hopefully, we’ll get the whole battle package out in early fall of 2010. Stylistically, we have turned back to the old school style of songs with grinding drums and fast guitars! This will also be our first concept album and the songs will relate the story of Tolkien’s tragic hero Túrin Turambar.” 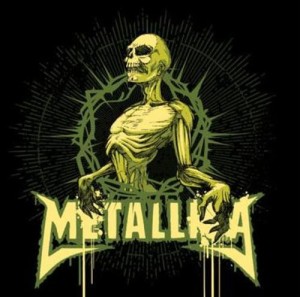 TMD shares the earliest known soundboard recording by the mighty METALLICA from the Old Waldorf in San Francisco, California on October 18th, 1982. The track is “Hit The Lights” (the group’s first ever original tune) and the lineup is Mustaine, Ulrich, Hetfield and McGovney. As the story goes, this was a show the band played for Brian Slagel’s Metal Blade Records to help promote a local compilation album entitled “Metal Massacre I”. This is one of the oldest METALLICA recordings in existence… and by far the most amusing. Hetfield sounds like he’s still going through puberty with his voice cracking (at points almost too painful to hear) all throughout the historic performance.

We just uploaded the first video of our rehearsals of the new upcoming album. If you listen carefully, you’ll find two little snippets of the pre-production recordings within the video.

Last week, we entered the recording studio, having a lot of fun combined with high motivation. We’ll put some more videos online, so stay tuned.”

A new demo track by American metal act LAMB OF GOD entitled “Hourglass” has been posted online over at Skullsnbones.com. The song will be featured on various editions of the band’s upcoming “Hourglass” 15th anniversary sets which are due out through Epic this coming Tuesday, June 1st.

Den Headz, SLAYER is going to make your Memorial Day 2010 that much more memorable.

If you missed the legendary thrash act’s performance on “Jimmy Kimmel Live” when it was originally broadcast last week, you can catch it this Monday, May 31 when the show repeats. The show aired live on May 20 and marked the first appearance the band did since vocalist/bassist Tom Araya had back surgery earlier this year. For the telecast, Slayer performed “Hate Worldwide,” and then “World Painted Blood” over the show’s closing credits. “Jimmy Kimmel Live” airs at 12:05AM ET and PT/11:05PM CT.

TheRaveLive.com will presents a free live webcast from FEAR FACTORY on Saturday, May 29. The broadcast will begin at 8:30pm ET / 7:30pm CT / 5:30pm PT / 12:30am GMT, and is scheduled to also include sets from Prong, Silent Civilian and Thy Will Be Done as part of the Fear Campaign Tour.

FEAR FACTORY is currently touring in support of their latest full-length, Mechanize, which was released via Candlelight Records February 9 to rave reviews from both fans and media alike. The live webcast will feature up to seven camera angles and near-CD-quality sound via: http://www.TheRaveLive.com.

TheRaveLive.com is a service of TheRave.com, the official website of The Rave/Eagles Club in Milwaukee, Wisconsin...
Read More

Atlanta (USA) based quintet DAATH are set to return to the studio early next month to begin tracking their highly anticipated third full-length release. The drumming phenom Kevin Talley (ex-Chimaira, Dying Fetus) begins tracking in Atlanta on June 7th with renowned producer Mark Lewis (All That Remains, Trivium, Devildriver) and co-producer Eyal Levi (guitars) at the helm. Be sure to stay tuned to www.myspace.com/daath in the coming weeks for exclusive, in-depth webisodes documenting the entire recording process.