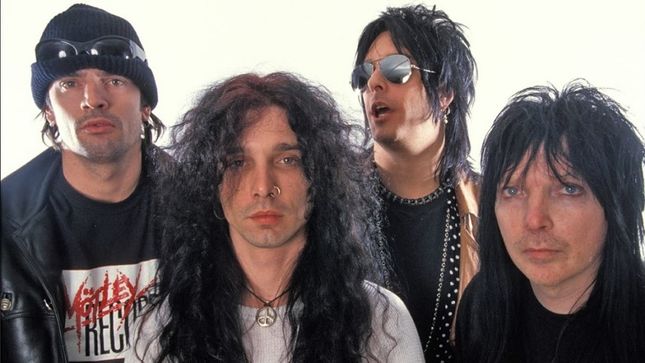 “Nikki is done with Vince Neil’s shit show,” said the Crue insider, who spilled the shocking details to TMD.

According to the anonymous source, the band held a series of rehearsals in Los Angeles late last month that they kept under wraps from Vince Neil. For the very first time in decades, it’s said that ex-Crue singer, John Corabi, performed with Nikki Sixx, Mick Mars and Tommy Lee.

A shocking story broke last week, claiming Sixx issued an ultimatum to Vince Neil that he must lose a significant amount of weight for the comeback tour or he would be fired and replaced by Corabi. Neil has taken desperate measures into his hands and is now doing a revolutionary ‘fat burning’ program in a last ditch effort to trim down.

With the matter said to be sworn in secrecy among the core of Crue’s band and their potential new lead vocalist, it’s hard to get the straight truth on what is really going on.

When asked today by an online fan about the demand Sixx placed on Vince Neil, John Corabi had this to say: “It’s the first I’ve heard of it!”

According to Blabbermouth.net: “former MÖTLEY CRÜE singer John Corabi recently completed work on his autobiography. Titled “Horseshoes And Hand Grenades”, it was written wih the help of MÖTLEY CRÜE historian/author Paul Miles, and is due on April 12, 2022 via Rare Bird Books.”

What can fans expect? Will the dirt finally be revealed once and for all about Corabi’s return to the lineup?

“Basically, the book is really kind of a testament to [the fact that] I knew at a very young age that I wanted to do what I’m doing for a living,” Corabi recently confided on a radio show. “Now, has it panned out the way that the magazines, the articles — you know, Learjets, limousines and all that other stuff? Probably not. But I’m still pushing forward, still trying to find my slice of the pie. But it’s really kind of a testament to perseverance.”

Latest News – Nikki Sixx Has Issued An Ultimatum To Vince Neil: Get Rid Of The Fat Or You Are Fired… Again! 😱 https://t.co/XQQGxzFk4L @MotleyCrue #FatShaming pic.twitter.com/QTF62gXvyk