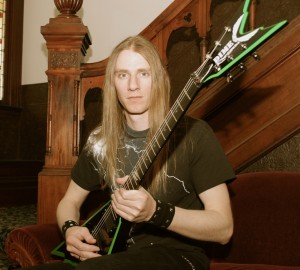 American metal act BLACKGATES features ex-ANTHRAX vocalist Dan Nelson plus former EXODUS/SLAYER/TESTAMENT drummer, Paul Bostaph, along with talented lead shredder Jeremy Von Epp and bassist Luis Barillas, the latter two having played together in California’s THE VENTING MACHINE. BLACKGATES has a thrash intensity but relies more on its overall melodic power and ability to craft genuinely heavy as hell tunes that stay with you long after the song ends. The band is currently in preparation to unleash their debut album. It’s no doubt that BLACKGATES is here to leave a mark and if the crushing demo cuts already posted by the group are any indicator of what is to come on the first full-length, they are definitely going to blow it up. 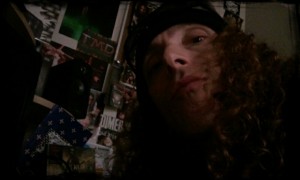 JEREMY: I was born in 1977 in San Jose, California , and have been living in the Bay Area all my life.

ROCKET: Do you have any siblings?

JEREMY: I have younger twin sisters named Melody and Sherene, and a younger brother named Chris.

JEREMY: My parents never really took me to any concerts when I was a kid, maybe Eddie Money at the state fair but thats about it. My first “real” concert was Van Halen on the Balance tour.

ROCKET: At what age did you start playing guitar and did you ever take any lessons? 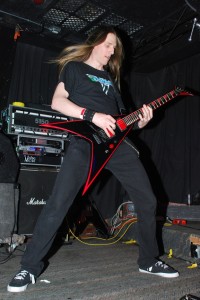 JEREMY: I started fiddling with the guitar in the late 80’s. I was actually a drummer already but there were guitars all around the house so it was only a matter of time. My Dad, who is a well known guitar teacher out here in the Bay Area, made sure I didn’t develop any bad habits but for the most part I learned on my own. It was’t until later that I took some serious guitar lessons from him and another great Bay Area player named James Robinson.

ROCKET: Who are some of your biggest guitar playing influences?

JEREMY: Van Halen and Randy Rhoads are my number one influences. Those two guys were my template on what to strive for. Anyone who played for Ozzy was good in my book as well. Later I got into Marty Friedman, Dimebag, Paul Gilbert, and most recently a cat named Marco Sfogli. In my opinion Sfogli is one of the best players I’ve ever seen or heard.

ROCKET: How exactly did you come to join BLACKGATES band?

JEREMY: Paul and I joined up, after he left Exodus, with the idea to start a new band from the ground up. He had heard of me through a mutual friend. It wasn’t until we got Dan Nelson in the band that the name BlackGates and the band itself, became an actual unit.

ROCKET: Let’s talk about the debut BLACKGATES album you guys are working on.
Who is producing it and where’s it being recorded?

JEREMY: We are about 10 songs into the writing process. So far, I’m super pleased with the way the songs are turning out. Were going to keep writing right up until we go in to record. As far as producer and specific studios, were not quite there yet but we have a good idea of what we would like to do. Stay tuned on that one. 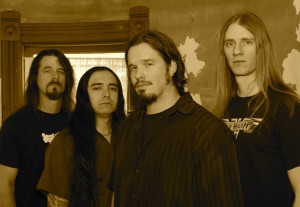 ROCKET: Does BLACKGATES have label representation yet?

JEREMY: As of right now, no. There is some interest from a few big name labels but no hard offers yet. We are still keeping them eagle eyes open.

ROCKET: What is the target release date for your first album?

JEREMY: We are hoping to get our debut album out in the first quarter of 2013.

ROCKET: So how does the songwriting work for BLACKGATES?

JEREMY: It’s a collaboration between Paul, Dan, and myself. Ill usually come up with a few riffs that work together and Paul and I will hash it out in the jam room. Dan does the same and sends us his ideas. As soon as we get an arrangement that were digging, we’ll send it back to Dan and he puts his stamp on it.

ROCKET: How would you describe Dan Nelson as a vocalist?

JEREMY: POWER!! Dan’s got a lot of power and more heart than most singers out there. He can really sing. He’s not a “metal screamer” like in most metal bands out there, but he does possess that type of edge. There is a void in today’s metal that he is going to fill with the way he sings. I think people are going to dig our direction and he’ll be a big part of that.

ROCKET: What kind of guitars are you playing live and in the studio?

JEREMY: For live I play a custom built Jackson king V, and I have a few Dean V’s that also get some rotation. For the studio, I have a Gibson gothic V that sounds and plays better than any other guitar I’ve ever had. I also have a couple of ESP guitars that work well in both settings.

JEREMY: I use the Peavy 5150 head with Marshall cabs. I use a Digitech GSP1101 in the effects loop for some delay’s and chorus. Thats it, I like it simple.

ROCKET: Do you have a warm up or ritual you do before playing live?

JEREMY: I’ll stretch my body really good, and I’ll do some arm windmills to get the blood flow to my hands. Ill play through some chromatic drills and maybe have a beer or two.

ROCKET: With all the killer metal releases over the past couple years, do you
have any personal favorites?

JEREMY: I really love the new Prong album “Carved Into Stone”. Also the latest James Labrie solo album “Static Impulse” is brilliant. Also the latest Threat Signal album is great as well. There is so much good stuff coming out. The new Van Halen album is heavy as hell!

ROCKET: Will BLACKGATES be touring heavy after the new album drops?

JEREMY: Eventually we hope to gain that type of momentum after the album drops. But the heavy touring may not come until the summer festivals in Europe arrive next year. We just gotta go out there and play our best and take it as it comes.

ROCKET: If BLACKGATES could open for any band in the world right now, who
would it be? And why?

JEREMY: Good question… I’d like to open for OZZY! Were all big Ozzy fans and our music would fit in well with that type of crowd. Plus there is a certain sense of prestige with Ozzy. To be associated with that would be a dream come true for me.

ROCKET: Where do you see yourself in ten years?

JEREMY: I’ll be out there jamming away doing what I love and what I was meant to do. Hopefully BlackGates will be on our fourth record by then. 😉

ROCKET: Thanks for rocking this out with me, brother. Best of luck with your music. Go
ahead and give thanks out to your biggest supporters.

JEREMY: Thank you, Cody, its been a pleasure hanging with you. I’ll give a shout out to all my friends and family. Love you guys, the best is yet to come!