THE AGONIST – “Alissa Has Slandered Our Name…”

A big online throwdown is happening between former THE AGONIST vocalist Alissa White-Gluz (now with ARCH ENEMY) and her old bandmates. White-Gluz made a recent appearance on Hatebreed frontman Jamey Jasta’s podcast, “The Jasta Show”. White-Gluz went public with details regarding her departure from the band in 2014, when she joined Arch Enemy. Now one of here ex-mates has stood up to take her on. Grab some popcorn, it’s a long one! According to White-Gluz, she “never in a million fucking years” thought they would kick her out of her “own band.” White-Gluz also said, “I don’t agree with what they did. I don’t have respect for what they did,” adding…

In the years since it becam... 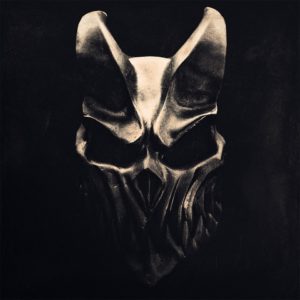 The second single and first music video off SLAUGHTER TO PREVAIL’s debut full-length album, “Misery Sermon,” has hit the internet for the track “Chronic Slaughter,” directed by Evgeniy Kozlov. Check it out HERE.

“Misery Sermon” is slated to be released on May 5th via Sumerian Records and is available in multiple bundles including limited edition vinyl in Kill Room Clear and“Burial Brown, with only 250 pressed for each color.

While vinyl ships out in June, fans will receive a digital download of the album on street date via email.

Slaughter to Prevail are a deathcore band with members from Russia and the United Kingdom formed in 2014. Their debut EP ‘Chapters of Misery’ will be released on May 25, 2015. 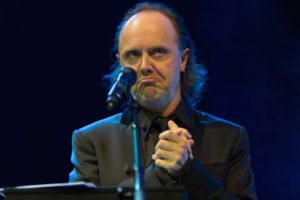 Ever wondered who removed Jason Newsted’s incredible bass playing on “…And Justice For All” record? According to engineer Steve Thompson it was none other than Lars Ulrich who turned down Jason Newsted’s bass.

Ultimate-Guitar.com got the scoop in 2015:

While Metallica’s 1988 album . . . And Justice For All is considered one of the band’s classics, it has been criticized almost since the day it was released for the lack of any bass guitar on the record. Jason Newsted’s playing is almost inaudible — and now we know who’s to blame. In a interview with one of the album’s mixers, Steve Thompson, revealed that drummer Lars Ulrich was the culprit. Ulrich apparently wanted his drums to sound a certain way — even if it meant cutting out the bass.

Thompson explained, “We had to get the drum soun... 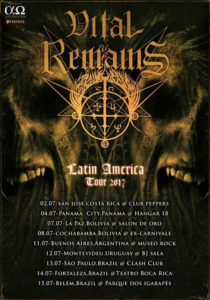 Alpha Omega Tours is pleased to announce a VITAL REMAINS Latin American tour, kicking off July 2nd in San Jose (Costa Rica) and running through Brazil on the 15th. Here are the confirmed dates: 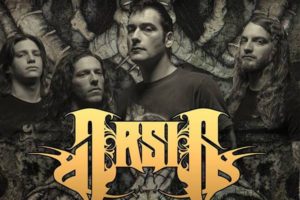 Virginia Beach, VA technical/melodic death metal band ARSIS have been working on new music as-of-late. For now, the group has once again linked up a drum play-through video for the pre-production version of their song “As Deep As Your Flesh,” which was originally issued in 2016. You can have a look HERE. Arsis comments:

“It’s been four years since the release of ‘Unwelcome’ and we are pleased to announce that new music is on its way. Stay tuned for more samples coming soon!”

When it comes to seminal death metal bands from North America, the East Coast alone boasts the likes of the genre’s greatest staples: Death, Cynic, Morbid Angel, Immolation, and Nile... 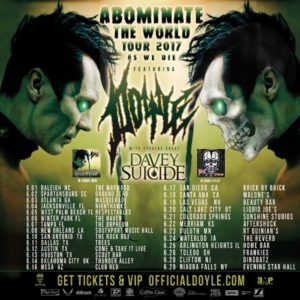 Legendary MISFITS guitarist Doyle Wolfgang Von Frankenstein continues his domination with the Abominate The World Tour 2017 featuring Davey Suicide. Launching June 1st in Raleigh, NC, the tour will wind south into Florida and Louisiana, then into California before heading East to finish in Niagra Falls, NY. The schedule is available above.

As We Die will be available worldwide on CD and LP May 5th, and is currently available for pre-order from EMP Merch, including several international versions with alternate artwork configurations, including art by legendary horror/comic/album cover artist Mister Sam Shearon, known for his iconic works with Rob Zombie, Iron Maiden, Clive Barker, KISS, Ministry, Rammstein, X-Files, and more.

In addition to As We Die, EMP / Monsterman will release seve...

AMON AMARTH – To Kick Off US Tour With Goatwhore 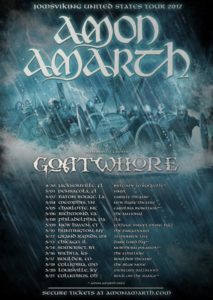 AMON AMARTH are set to kick off a US headlining trek with labelmates Goatwhore. Beginning this Sunday, April 30th and running through May 21st, the eighteen-date trek will also see AMON AMARTH making appearances at some of the country’s premier music festivals including Welcome To Rockville, Carolina Rebellion, Dark Lord Day, Northern Invasion, and Rock On The Range.

**UPDATE: This story is fake. The fact is that while the Crue are perfectly healthy, and still performing in their own side projects today, they simply lost the passion to perform as a unit for their fans and farted out with a whimper in 2015, having only released one studio album in the past 9 years. The truth is these four dudes did not even hang out all together to celebrate after their ‘final’ concert, after having been to the top of the rock n roll mountain together.

WE HAD A GREAT 35 YEARS TOGETHER BUT WE ENDED IT AND THERE IS NOTHING IN THE FUTURE AS A BAND.. https://t.co/QRyCfrrV0U 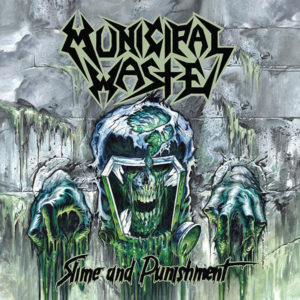 Slime and Punishment is the first Waste album to be engineered by bassist Phil “Landphil” Hall at Blaze of Torment Studios in Richmond, VA. Mixing and mastering was completed by Bill Metoyer (Slayer, Lizzy Borden) in Hollywood, CA. Additionally, the cover artwork was created by Andrei Bouzikov. This is the fourth cover he’s created for Municipal Waste. 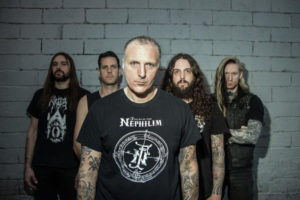 On June 16th, Brooklyn’s TOMBS will release their fourth full-length album, “The Grand Annihilation,” via Metal Blade Records. Check out the rocking new single “Saturnalian” below.

Produced once again by Erik Rutan, “The Grand Annihilation” remains rooted in the blackened, post-metallic sound that the band has become known for since 2007’s self-titled EP, while also being the group’s most experimental record to-date.

To kick off the album’s release, Tombs will embark on a USA tour on June 16th with Fit For An Autopsy and Moon Tooth. Dates are as follows: