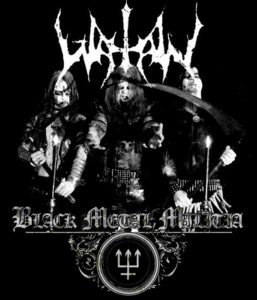 The photo in question was forwarded to Metalsucks, who reached out to the band for comment. Watain frontman Erik Danielsson subsequently provided them (via their record label) with the following statement:

“The gesture on that picture was done in jest that’s as much as we have to say about that, but to put an end to this tiresome and time-consuming nonsense the guitarist in question has decided to step aside for a period of time to avoid further hopeless discussions on the subject.

“We furthermore spit upon the ill-willed ignorance of all those who maintain that Watain have any political agenda whatsoever, for 20 years we have proven otherwise and people should know better by now. Finally we would like to send a heartfelt fuck off to all who insist on feeding the mindless moral witch-hunt hysteria that is now festering on worldwide Heavy Metal culture. Hail Satan!”

This is the second time in recent months that Teitan has been accused of giving a Nazi salute. Watain denied all allegations of Nazism in January after Teitan gave what many interpreted to be a Nazi salute during a show in Stockhold, Sweden.