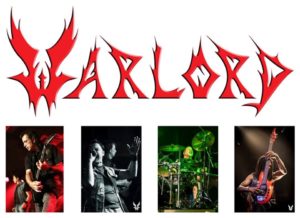 Frontiers Music Srl is pleased to welcome legendary U.S. metal act WARLORD to the family for the release of a new studio album in 2018!

Long admirers of the band and having gotten to know drummer Mark Zonder through his work with Graham Bonnet Band and the upcoming group, Spirits Of Fire, (which also features Tim Ripper Owens (Charred Walls Of The Damned, ex Iced Earth, Judas Priest), Chris Caffery (Savatage, Trans-Siberian Orchestra), and Steve Di Giorgio (Death (Official), Testament, Sadus)), Frontiers approached Zonder about the prospect of doing a new Warlord album for release in 2018. Luckily for the label, Zonder and co-founder/guitarist William J. Tsamis were very much open to the idea. Says Zonder, “[a]fter all of these years, Warlord is with a ‘real label.’ It will be great to have Warlord music shared with a worldwide audience., which is something that has been missing for many years. With my prior working experiences with Frontiers, I know Warlord is in the right place and I am very appreciative of this great opportunity. We thank everyone at the label for their belief in Warlord!”

In September 2013, Tsamis and Zonder announced that they had tapped vocalist Nicholas Leptos of Arrayan Path and Astronomikon to be the new Warlord singer. This line-up, along with bassist Bynoe will be the line-up for the upcoming new album. Adds Zonder, “this Warlord release will be like all of the previous ones, 100% Warlord. No changing of direction to keep up with the current fad, just good ol’ school Warlord music. Maybe leaning back a touch to the early days and we promise a high energy album that features the classic Bill Tsamis compositions and his classic guitar melody lines. As I always try to do, I’ll give it my all in tandem with my favorite bass player Philip Bynoe, working together to create a solid foundation. This will be the first studio recording with Nicholas Leptos on vocals. We have performed live with him several times and are eagerly awaiting to capture his dynamic performances on tape. A classic Warlord album in the making……”

Stay tuned for updates as work on the album progresses….