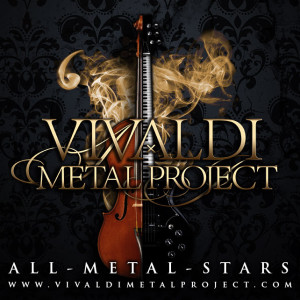 Pride & Joy Music has announced the signing of the Vivaldi Metal Project.

The VIVALDI METAL PROJECT is an all-star metal project conceived and created by keyboardist, arranger, composer and producer maestro Mistheria (Bruce Dickinson, Rob Rock, Roy Z, etc.) together with bassist, composer and co-producer Alberto Rigoni. The aim of the project is to arrange and perform a metal version of Antonio Vivaldi’s legendary Baroque masterwork “THE FOUR SEASONS”.

The duo already has started to work on this project in late 2013 together and since then gathered more than 70 musicians from over the world plus the ”Sinfonietta Consonus Orchestra” and the ”Academic Choir Manolov’ to take part in this mammoth project. The recordings will soon be completed and the release is planned for late May 2016. More news on this will follow.

Mistheria says: “It has been a big challenge for the project creators and for all the participants to re-arrange and to perform this classic masterpiece beloved by millions people all over the globe in the vein of metal music power. It took about 1.5 years to form a cast of top rock and metal singers and instrumentalists. And finally recordings now have been almost completed after a full year of working on arrangements by a strong international arrangers’ team from several countries.”

PRIDE & JOY MUSIC is a new rock, blues & metal label based in Ascheberg, Germany. Founded in early 2015 by Birgitt Schwanke, owner of the established PR agency GerMusica, former owner of Rock It! magazine and co-owner of the Yesterrock label. The physical distribution for PRIDE & JOY MUSIC will be handled by one of Germany’s biggest independent distributors EDEL.