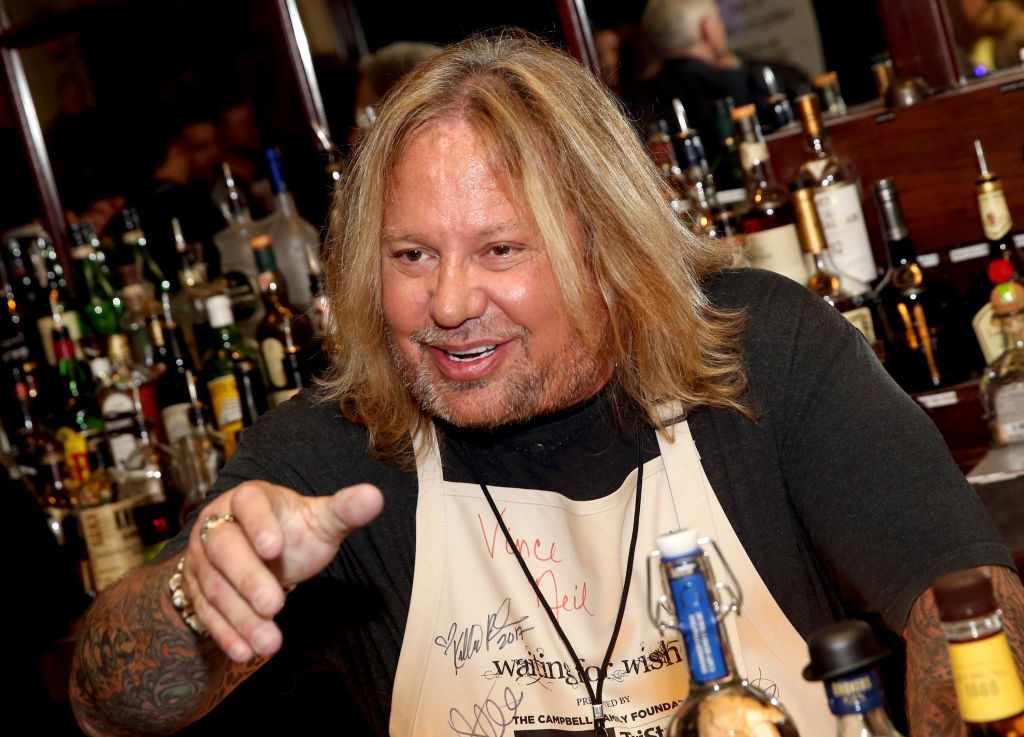 No joking around. On this past Wednesday (November 24), Vince Neil took part in an “epic drink-fest and block party” at the Fremont Street Experience in Las Vegas, and the biggest shocker is that the inaugural DrinksGiving celebration featured a free concert by MÖTLEY CRÜE‘s troubled frontman. Fans are scratching their heads because if you recall Neil’s camp claimed he broke his ribs when he plunged off the stage just a little over a month ago. Was his injury a hoax? How could he have possibly recovered so quickly? Nonetheless, the highly offensive title for the event, taking into consideration Neil recklessly killed the drummer of HANOI ROCKS while driving intoxicated, certainly leaves one wondering if the alcohol that is soaking Neil’s brain 24/7 has not finally begun to erode his ability to think clearly.

As the story goes, “Tourists, locals, and rock fans alike were invited to celebrate DrinksGiving on Blackout Wednesday in Downtown Las Vegas with drink specials, pub crawls, drinking games and more.” While no advanced promotion or announcement of the event happened, word going around is that Vince was itching so bad to get back into action after he fell and purportedly injured his ribs that he hatched the perfect way to make his solo return in true rock style.

You can view the concert footage below. Anyone with a brain in their head will see that Vince is intoxicated and slurring the lyrics so bad that he is not even fully enunciating the words to each song. Are we in the midst of the greatest trainwreck ever seen in the history of rock n roll? Quite possibly. You be the judge.

Fremont Street Experience marked Neil‘s return to the stage after he was said to have broken multiple ribs while performing with his solo band at the Monsters On The Mountain festival at LeConte Center in Pigeon Forge, Tennessee on October 15.

Thanksgiving is for family; #DrinksGiving is all about friends tying one on for a good, old-fashioned drink fest featuring a hilarious #onesiepubcrawl and giant sized drinking games all on legendary Fremont Street!

Keep in mind, a blockbuster story that TMD dropped recently confirmed the worst for Crue’s devoted legion of fans, ex-Crue limo driver, Al Bowman, said that Vince Neil is indeed drinking himself to death. This is another reason why fans are confused by Neil’s participation. If he is getting help to lose weight then don’t you think he needs to get some help with drinking so much that your gut swells up to the size of a woman pregnant with twins? What happened to him getting in shape for the Crue’s big comeback in 2022?