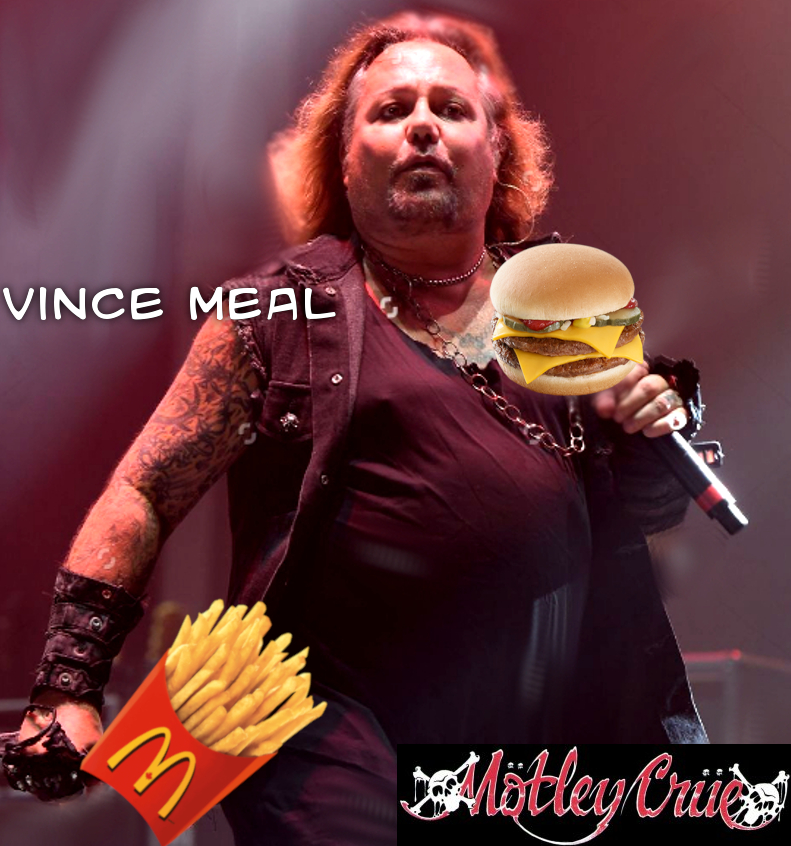 The spectacular downward spiral of MÖTLEY CRÜE‘s singer continues as Vince Neil aka “Vince Meal”, 60, suffered a serious injury when the troubled vocalist actually fell off the stage during his solo band’s performance last night (Friday, October 15) at the Monsters On The Mountain festival at LeConte Center in Pigeon Forge, Tennessee. This is not a joke. This really happened.

According to Metal Sludge, the incident occurred early into the set — while the group was performing “Don’t Go Away Mad (Just Go Away)”, a CRÜE classic which has been a staple of the singer’s solo shows.

In fan-filmed video of the mishap, that can be viewed below, Vince appears to have trouble with his balance, losing his footing and falling off the stage.

According to TMZ, it “turns out there was a small gap between the speaker and the stage that Vince didn’t see and he fell through the crevice onto the floor…. His roadie and a security guy helped him get to his feet, and Vince limped away.”

A short time later, bassist Dana Strum addressed the crowd about the extent of Neil‘s injuries, saying: “The truth is Vince fell and broke ribs when he fell. He can’t breathe and he’s gonna get dealt with medically. Now, that sucks for us, and him. He was so excited to be here. He lives in Tennessee. But he was willing to stick it out and tough it out when the people back here were telling him ‘Don’t do it.’ Let’s have one good round of applause, please, for this guy.”

According to sources cited by Metal Sludge, Neil was taken away in an ambulance. Monsters On The Mountain event co-host Eddie Trunk later tweeted that Neil is “at hospital now getting care & X Rays.”

Oddly enough, this accident occurred right after TMD broke a sensational story about Vince’s ex-limo driver claiming the singer is drinking himself to death and is in the worst shape of his career.

Last month, Vince revealed that after being given an ultimatum by Nikki Sixx to lose weight or be replaced by John Corabi, he was trying out a new toning machine in an apparent effort to get in shape for MÖTLEY CRÜE‘s upcoming “The Stadium Tour”. The singer said he was using Emsculpt Neo, a revolutionary new treatment which supposedly builds muscle and reduces fat using both radio frequency and high-intensity electromagnetic energies.

Four months ago, Neil shocked fans when he failed to complete his solo concert at the Boone Iowa River Valley Festival in Boone. Based on fan-filmed video footage of the May 29 gig posted on YouTube, Vince totally lost his voice several songs into his set, which consisted only of CRÜE classics and cover songs previously recorded by the band.

MÖTLEY CRÜE‘s “The Stadium Tour” with DEF LEPPARD, POISON and JOAN JETT & THE BLACKHEARTS, which has been postponed two times already, may be in jeopardy as it’s not known the extent of Vince’s injuries and his ability to ever perform at a rock concert again.