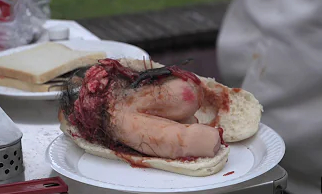 Troubled Mötley Crüe vocalist, Vince Neil, has been called a lot of things in his lifetime, but a “cannibal” is taking it to another level entirely, right? If you think you’ve seen it all, you’re about to learn the true meaning of the word horrific. No, I’m not describing the recent concert performances turned in by Vince Neil and his solo band, pedaling shitty ass versions of Crue classics at your local fair. I’m talking about the outright disgusting feeding frenzy of human flesh that Vince is allegedly partaking in during his own concerts. This is extremely graphic content. So turn back now if you get sick to your stomach easily.

Word going around is that Mötley Crüe (Nikki, Tommy and Mick) are contemplating the idea of replacing their monster-sized vocalist with John Corabi, the only other man to sing for the legendary glam metal band on a studio album.

With the escalation of Vince’s behemoth like appetite, his personal entourage has purportedly been tasked with making sure that the singer is allowed to eat multiple abducted fans pulled from the audience at his own gigs. These poor unsuspecting Crue diehards think they are going to get to hang backstage with Dr. Feelgood, but instead they are quickly decapitated by Vince in his dressing room. It’s said the sheer brutality of the way he rips their heads off is likened to that of Vlad the Impaler when he was at his worst.

An anonymous concert goer who got a backstage pass at Vince’s latest show comments:

“I watched my childhood idol rip out the eyeballs of one woman and eat them like they were gum drops.”

Vince is booked next to perform at Monsters On The Mountain festival. My best advice to you is to leave your kids at home.

The pupil of the eye is perfectly round in every human. If you are a reptilian/human hybrid, however, and "possession" has taken place via Satanic Ritual your pupil looks like this. No joke. Or is it?https://t.co/azCf4dKPDl @MotleyCrue pic.twitter.com/eupdpWSRjS