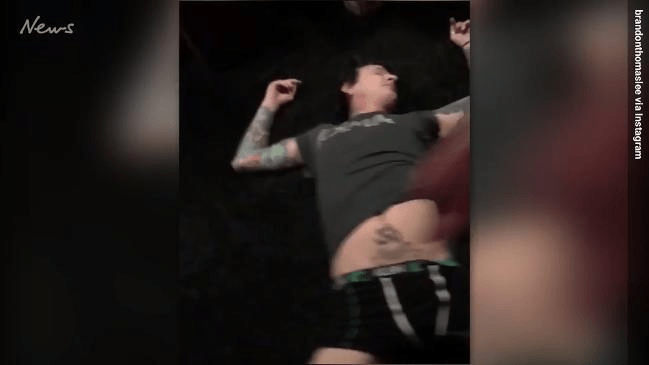 McDonald’s has named MOTLEY CRUE‘s injured drummer, Tommy Lee, 59, as a brand ambassador. The legendary musician will be the face of its returning McRib sandwich, slated to be making its return to the menu at select McDonalds around the USA at an unspecified date later this summer, as part of a national campaign to bring awareness to physically abused men and women.

“Yo, I know what it’s like to take my lumps,” said Tommy Lee, who is himself a recovering battered person, after having been knocked out by his own son several years ago. “When someone you trust hurts you in a physical manner it also cuts deeply inside that person being abused and causes great mental trauma.”

T-Lee’s fans can rejoice in the news that the McRib sandwich will return!

A spokesman for the company issued the following statement:

“In light of what T-Lee has been going through after breaking four ribs yet somehow managing to still make an appearance at the Crue’s comeback concerts, shows you what a stand-up guy he is. On behalf of the McDonald’s family, we want to welcome him with open arms. We know everyone can relate to T-Lee, and through the ups and downs of his life, he always manages to keep a smile on his face. We are proud to name Tommy Lee as our brand ambassador for the upcoming relaunch of the McRib.”