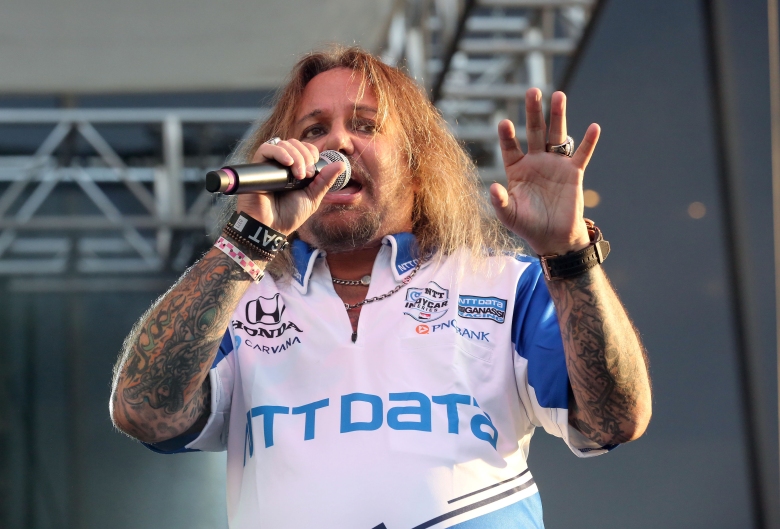 Vince Neil, 60, made an appearance at the Acura Grand Prix of Long Beach this past Saturday night with his solo band to perform a concert, but unfortunately Neil and company showed up 30 minutes late. That being said, once Neil stepped onto the stage the fans totally lost their minds, and he delivered perhaps his best show of the year.

Amid the rumors of Crue kicking around the idea of firing Neil again, and purportedly conducting secret rehearsals with ex-Crue singer John Corabi, the troubled frontman continues to try and fight his way out of the hole he currently finds himself in, mentally and physically. It seems it will surely be a race to the finish for Neil, as pressure continues mounting in lieu of MÖTLEY CRÜE‘s big comeback, slated to finally happen in 2022.

However, Neil’s fast living lifestyle, which includes massive food consumption and binge drinking, could spell doom for all four original band members reuniting for a return to the concert stage.

The funny thing is the same guy who the Crue hired to be their historian, author Paul Miles, is also helping John Corabi with his book that is set to be released, yet he is going around doing interviews stating that there is “confusion” as to whether or not Vince was fired by the band back in 1992 or he quit.

However, after doing some careful research, something he might want to do himself, clearly the fact is that Vince was indeed fired by Nikki Sixx, the man who first formed the band. In his own words, stated during a past interview, Vince Neil admits that he got fired because “I was a race car driver…” (listen to the interview HERE or below)

Neil, in fact, competed in the 1992 Firestone Indy Lights Championship, according to the Daily News, and finished in the top 25 that season after completing three races. Neil was so into racing that it was specifically noted in the press as being “one of the reasons the band broke up that same year.”

Fans will recall it was Neil’s drunken and reckless driving that was responsible for killing Hanoi Rocks drummer Razzle in 1984. Neil’s current physical problems are connected to an obvious weight issue he is battling with, which ultimately affects his breathing and mobility, plus hinders his singing voice.

Neil is now said to be trying a revolutionary fat burning treatment in attempt to keep Nikki Sixx happy, who reportedly gave Neil an ultimatum to get fit or face the possibility of being replaced by Corabi a second time.

Critics continue to slam Neil for his below par concert performances this year. Several months ago, Neil himself quit performing during a show while singing ‘Girls Girls Girls’ claiming his voice was gone.

"Lumbering around the Uline Warehouse Saturday night, Vince Neil was a reminder that some musical frontmen are not charismatic, interesting or gorgeous." – Milwaukee Journal Sentinel

Crue has twice postponed their highly anticipated co-headliner tour with DEF LEPPARD, now set to take place in the summer of 2022, although there is belief among some critics now that the tour will most probably not happen due to the ongoing Covid 19 pandemic.

All sorts of crazy speculation about the downward spiral of Neil has littered the online news media in recent months, including a wild hoax claiming that Vince actually attempted to kill himself, along with a petition being started that calls for ex-SKID ROW vocalist Sebastian Bach to replace Vince Neil.

Neil is set to appear at Monsters On The Mountain festival in October.