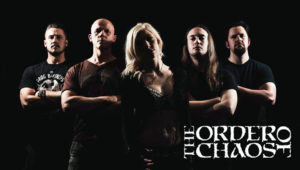 Canadian metal band THE ORDER OF CHAOS will be unleashing their new EP “Night Terror” on February 23rd, 2018 to follow their highly acclaimed 2015 full length “Apocalypse Moon” (Killer Metal Records) that took the band on tours across China, Europe and Canada. The upcoming 3 song EP was produced by Nathan Kidd & Dave Stoten at Method Music Productions in Edmonton, AB represents their most mature and dynamic songwriting effort to date.

The Order of Chaos premiere their new video for the EP’s title track “Night Terror” below. The clip was directed and produced by their very own bassist Barrett Klesko who runs FadeBack Studios United.

Chaos and Order, two seemingly opposing forces that, when observed closely enough, work together subtly to create art in its most divine form. Enter The Order of Chaos, a highly regarded and well-respected heavy metal group from the rural northern wastelands of Alberta Canada. For the last 12 years, trudging through the snow covered Canadian landscape, and touring the vast expanses of Europe and China, this band has cut its teeth in the most demanding gigging environment this side of the equator. The band continues to bring their unique, fresh and well developed sound to a genre of music so saturated with sound-a-likes, 80s throwbacks and copy cats. After years of dedication to their art and hard work in the music industry, The Order of Chaos has cemented themselves as one of Canada’s premier metal artists. In 2013, the band was awarded Heavy Metal Recording of the year for their 2nd full length album entitled “Burn These Dreams”. Their extensive activities and efforts in the music industry has brought Edmonton into the heavy metal spotlight nationally and across the globe highlighting the diversity and quality found within the Edmonton arts community.