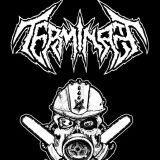 Selfmadegod Records is proud to announce the signing of TERMINATE from Morton Grove, Illinois.

The mission of TERMINATE is simple: to play death metal the way it was meant to be played. Taking influences from death metal stalwarts Bolt Thrower and Autopsy, while maintaining a melodic sensibility akin to Swedish greats Dismember and Entombed is what defines Terminate sound.

Thanks to their self-released Thirst For The Obscene EP in 2011, Polish label Selfmadegod took notice of the crushing act and immediately inked a deal with TERMINATE to release their debut full-length in early 2013, which the members are currently in the process of finalizing. More details will be announced soon.

TERMINATE was formed in late 2009 by guitarist/vocalist John Porada and drummer Jim Smith. After releasing their Thirst For The Obscene demo, the lineup was completed with Tom Cardella on guitar and Alfred Mulle on bass. Consisting of veterans of the Chicago metal scene as well as the New York metal scene, the band has quickly made a name for itself, catching the attention of not only within their home city of Chicago, but also a core of underground fans across the world.