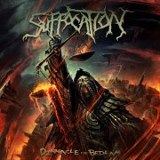 New York death metal act SUFFOCATION posted a video featuring sample clips of the upcoming “Pinnacle of Bedlam” release. The album is set for release on February 15, 2013 via Nuclear Blast Records and is the first to feature new drummer Dave Culross, who was with the band from 1997-1998 and recorded drums for the “Despise the Sun” EP. He replaces the outgoing Mike Smith, who left the band this past February.

The track listing for “Pinnacle of Bedlam” is:

Check out the sample clips HERE.