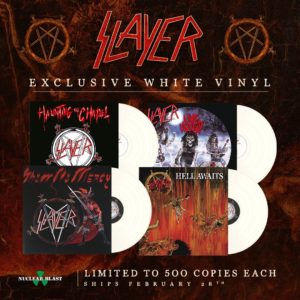 Three and a half decades into its career, Slayer remains the preeminent punk-thrash band that helped establish the genre and that up-and-coming metal heads continue to revere and emulate. Slayer is a five-time nominated, two-time Grammy Award-winning metal juggernaut that writes songs which mirror the turmoil and aberrations of our society. Repentless, the band’s first new album in six years, continues the Slaytanic offensive with a twelve-song, blood-shaking sonic attack. Repentless is dark, fast, aggressive and without mercy. It was also the most challenging record Slayer has ever had to make.

In 2013 the world mourned the loss of guitarist Jeff Hanneman who died from complications following a two-year illness. A co-founder of Slayer, losing Jeff was very difficult for the band. During Jeff’s illness, friend of the band, guitarist Holt stepped in to help out on tour with Jeff’s blessing and stayed on. Around that time, drummer Dave Lombardo exited the band for the third time and Paul Bostaph, (who played with the band from 1992 – 2001), returned to take over the throne. Slayer never skipped a beat and since Holt and Bostaph both played in Exodus, it was all-in-the-thrash-family.

But it didn’t come easily. As guitarist and Slayer co-founder Kerry King puts it, “I remember the day that Jeff died. It was the day of the Revolver Golden Gods Awards. We knew he’d been sick but nobody expected it to be so quick. I assumed I’d be able to go out there and see him after I got done with whatever business I had to do and that day never came.

“We went out and toured afterwards to see how we felt about it. That’s what you do as a musician: you either go out and tour or you stop working. Even though we’d been touring for two years without Jeff, thinking he was going to come back, now there was finality to it. And the thing with Gary was that we were all friends. Exodus was the first band we’d ever met that became our friends immediately and we stayed friends throughout the years. Gary is just a guitar dynamo and he was the guy.”

Tom Araya agrees. “Jeff would want us to continue. I’d think that if something were to happen to someone else in the band, whoever it was would feel the same way. Just get on with it. Gary’s a friend, a friend of Jeff’s, he knew what was going on and he wanted to help in any way he could, so Gary made Slayer a comfortable place to be. Having Paul back was also a comforting feeling. He’s a former member and that’s the best thing about it. It wasn’t some other guy. Having Paul and Gary made everything a little easier to handle. It’s about the band. Slayer was a big thing for Jeff, and so I’m looking at it in that sense. It was his baby, too. And we hope we’ve done Slayer and him justice.”

King said that Slayer still had to test the water. “Now we were out to see if it made sense to continue, to see if we liked it, to see if the band still enjoyed it. And the way I looked at it was: if it wasn’t this, it was going to be something that sounded exactly like this, so why not continue doing this? It’s super-potent. We’re really tight right now and we’re stoked that we’re still doing it. Once we had that under our belts we started thinking about a record and never looked back.”