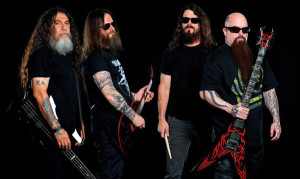 “Cast The First Stone”, a brand new song from SLAYER , can be streamed using the SoundCloud widget HERE. The track is taken from the band’s eleventh studio album, “Repentless”, which will be released on September 11 via Nuclear Blast.

SLAYER guitarist Kerry King told Rolling Stone that he got the idea for the song while walking around Athens, thinking about all of the clashes that took place there over the centuries. “It’s just about battle, not a particular battle,” he said. “You cast the first stone, I’m gonna win.”