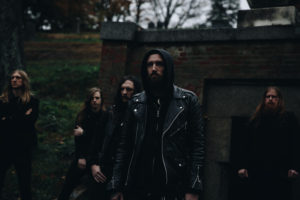 Ohio metal quartet SKELETONWITCH will release their first new album in five years this summer. The outing has been titled Devouring Radiant Light and is slated to hit streets on July 20 via Prosthetic Records. The first single, “Fen of Shadows” is online now and can be streamed HERE.

Guitarist Scott Hedrick describes “Fen of Shadows” as “Skeletonwitch 2.0,” stating, “the song travels further down the rabbit hole with more elaborate arrangements, layers of wailing guitar, and strong dynamic shifts. It’s the most fully-formed example of what this band has become.” New vocalist Adam Clemans notes that the single lyrically “sets up the theme for the entire record. It’s of my belief that in times of turmoil and darkness, we as humans, learn the most about our true selves. If you look within, you will always find light, passion and dedication. To what exactly, is up to the individual. For us, it’s creating music together and as individuals.”

Although they came together as a band in 2003, the members of Athens, Ohio’s Skeletonwitch draw the bulk of their inspiration from artists and musical styles born all of two decades earlier: namely the undying flame of classic Bay Area thrash; its creative bedrock in the New Wave of British Heavy Metal; and, to a lesser degree, death, black, and Viking metal. First introduced via 2004’s independently released At One with the Shadows album and 2006’s Worship the Witch EP, Skeletonwitch’s retro-fitted yet modernly executed creative vision arguably reached a new level of maturity with 2007’s Beyond the Permafrost full-length, their first for Prosthetic Records. In any case, Skeletonwitch members Chance Garnette (vocals), Nate Garnette (guitar), Scott Hedrick (guitar), Eric Harris (bass), and Derrick Nau (drums) then set out to prove their metal mettle on tour, Flying V’s cocked and loaded. After some hefty touring, Chance and Nate Garnette, Hedrick, Nau, and bassist Evan Linger headed into the studio to begin work on album number two. The resulting Breathing the Fire dropped in 2009, and debuted at number 151 on the Billboard 200 chart.

Arriving in 2011, Forever Abomination was the first Skeletonwitch outing to feature new drummer Dustin Boltjes, and 2013’s critically acclaimed Serpents Unleashed reached number 62, but would prove to be the last go-around for vocalist Chance Garnette, who was fired in 2015 due to his substance abuse problems. The following year saw the band add Wolvhammer vocalist Adam Clemans to the roster and release a new EP, The Apothic Gloom.