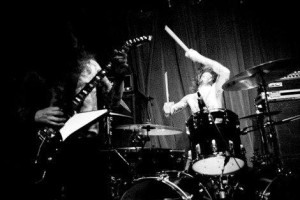 This Fall, California metallers, SAVIOURS, will drop the molten fruits of their new full-length this Fall via a new partnership with France’s Listenable Records. Titled Palace Of Vision, their first full-length in four years was captured at Type Foundry in Portland, Oregon with the inimitable Billy Anderson (Neurosis, Brothers Of The Sonic Cloth, Eyehategod, Taurus, Ommadon etc.) and boasts nine tracks of SAVIOURS’ signature brand of towering riffs, colossal rhythms, infectious guitar harmonies and an obsession with the end of times, the occult, psychedelics and the arcane. “It’s a natural and logical continuation of where we left off with [2011’s] Death’s Procession,” said drummer Scott Batiste of the offering. “There are some doomy crushers and faster ragers.” As an added bonus, the record comes sheathed in the fittingly dark, intricately transfixing cover renderings of Derrick Snodgrass (Obliterations, Lecherous Gaze).

In anticipation of its arrival, today Cvlt Nation offers up the first helping of Palace Of Vision in the form of opening bruiser, “Burning Shrine.” Comments Batiste, “‘Burning Shrine’ is about watching the world burn as it is ruined by religious zealots. Crank it up, live evil or die!”

Adds Cvlt Nation: “This motherfucker is a straight raging jam! Fasten your seat belt, press play and let the mammoth riffs the band kicks out do the rest. Caution: SAVIOURS have been known to cause non-stop headbanging – you have been warned!”

Turn up and tune out at THIS LOCATION.

In related news, SAVIOURS will bring their riffs to the stage with a pair of east coast/west coast fest performances with additional live incursions to be announced in the coming weeks.

Still building upon the foundation that Black Sabbath, Iron Maiden, Thin Lizzy and Motörhead laid, SAVIOURS enters their second decade in a new partnership with French label Listenable Records. Rooted in hardcore punk but preferring to cruise in outer space, the lysergic of SAVIOURS hessians have always brought a ton of swing and swagger to their forward-charging heavy metal. The band melds sounds from the New Wave Of British Heavy Metal, progressive rock, and proto-doom, and delivers it all with a snarling West Coast hardcore edge. The result is an absolute beast of a sound that is all SAVIOURS’ own.

Since the 2005 release of SAVIOURS’ debut EP, Warship, the band has worked relentlessly, touring North America, Europe, and Japan with the likes of Mastodon, Corrosion Of Conformity, The Sword, High On Fire, Saint Vitus and Clutch. In a few short years, SAVIOURS have risen to become stalwarts of the world’s metal scene, ambassadors of an aggressive-yet-stoned West Coast vibe, inspired by the ’70s but totally real and relevant in 2015.

Palace Of Vision will be released via Listenable Records on October 30th, 2015. Preorders to be unveiled in the coming weeks.

“You know you’re playing a good set when your music not only commands the attention of the likes of J Mascis and Matt Pike, but you’re sounding so tight that it compels the two guitar greats to air shred like a couple of Maiden fans circa 1980.” – Decibel