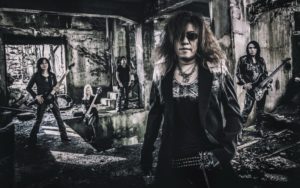 SABER TIGER was founded in 1981 by guitarist Akihito Kinoshita and they have been representing the Japanese metal scene ever since. In recent years, they have been more prolific than ever, leading to the international re-release of “Bystander Effect” via Sliptrick Records on March, 2018.

The re-release of “Bystander Effect” is not just a simple re-issue for the international market; four of the tracks, originally in Japanese, have been re-recorded with English lyrics, while the brand new acoustic instrumental “Ship Of Theseusand” a new recording of the Saber Tiger classic “First Class Fool” are exclusive to the Sliptrick Records release. Also, demo recordings of the spectacular tracks “Sin Eater” and “What I Used To Be” are included.

For the last 35 years, Saber Tiger has been building a strong fan base in their native Japan, improving upon their classic heavy metal sound and contemporary progressive touches with each step along the way. And this isn’t just any anniversary: from now on, the rest of the world will fall prey to Saber Tiger.

Saber Tiger was founded in 1981 by guitarist Akihito Kinoshita. It hasn’t been an easy ride; numerous line-up influences and the band’s relatively remote location on the northern island of Hokkaido may have slowed down the rise of Saber Tiger, but Kinoshita has soldiered on through good times and bad. Lately, the band is experiencing the most prolific years of their career. With singer Takenori Shimoyama, guitarist Yasuharu Tanaka – both of whom had extended stints with the band in the nineties – and drummer Yasuhiro Mizuno in their lineup, the band sounds more inspired than ever.