Harley-Davidson of Glendale, CA (3717 San Fernando Rd.) will be the site of the Ronnie James Dio Stand Up and Shout Cancer Fund Street Party, taking place on Saturday, March 5th from 2:00-5:00PM. The event will include a special raffle drawing to win the one-of-a-kind, custom-painted “Holy Diver” Harley Motorcycle.

This FREE event will be open to the public and include live entertainment by DIO DISCIPLES, GABBIE RAE, BUDDERSIDE, ERNIE SNAIR, and THE LOVELESS, plus food truck eats by Slammin’ Sliders and King Kone Ice Cream, and the opportunity for attendees to pre-register for the 2nd Annual RIDE FOR RONNIE Motorcycle Ride & Concert, which will be held on Sunday, May 22, 2016.

A celebrity guest will pull the winning raffle ticket for a one-of-a-kind “Holy Diver” Harley motorcycle. This 2015 FXDB “Street Bob” model Harley is custom-painted with the illustration that graced the cover of Ronnie James Dio’s iconic Holy Diver album. A total of 666 tickets are available at $50 each or 3 for $100 and will continue to be sold online until the day prior to the March 5th event, and in person up to the time scheduled for the drawing. 100% of the proceeds from the sale go directly to the Ronnie James Dio Stand Up and Shout Cancer Fund.

TICKETS AVAILABLE FOR PURCHASE AT http://www.diocancerfund.org 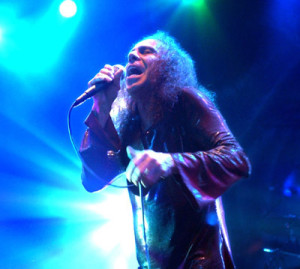 As mentioned above, Street Party attendees will also have the opportunity to pre-register for the 2nd Annual RIDE FOR RONNIE Motorcycle Ride and Concert, which will take place on Sunday, May 22, 2016. On that day, riders will depart from Harley-Davidson of Glendale and ride to Los Encinos Park in Encino, where they will be treated to an afternoon of live music, raffle/silent auction, food trucks and more. More details are set to be announced soon.

The Inaugural Ride, held May 2015 as part of a weekend of events commemorating the 5th anniversary of the passing of Ronnie James Dio, drew over 300 riders and fans.

The Ronnie James Dio Stand Up and Shout Cancer Fund was formed in memory of the legendary rock singer Ronnie James Dio, who lost his life to gastric cancer in 2010. SUAS has already raised over $1 million for cancer research projects in its short history. Just recently, the original bass player in Dio, Jimmy Bain, died of lung cancer and Lemmy Kilmister, the celebrated leader of Motorhead, lost his battle with what was deemed an “extremely aggressive cancer” just after Christmas. These and other deaths attributed to cancer have only reinforced the commitment of the Dio Cancer Fund to support research and education that furthers early detection, prevention and treatment of prostate, colon and gastric cancers. Portions of the money raised thus far has been allocated to the cancer research work of the T. J. Martell Foundation for Cancer, AIDS and Leukemia Research, and the Gastric Cancer Research Unit of the M.D. Anderson Cancer Center in Houston, where Ronnie was treated during the last six months of his life.