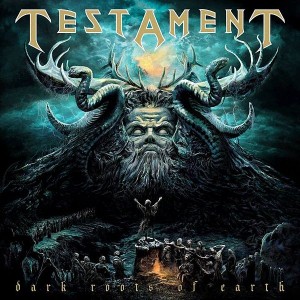 Dark Roots of Earth is the tenth studio album by American thrash metal act TESTAMENT and for this reviewer it falls way short of the slamming brilliance of 2008’s The Formation Of Damnation. However, I still found myself rocking out hard and heavy to a bunch of ripping cuts on this CD. I mean, come on… this is still a great band. Released via independent German record label Nuclear Blast, Dark Roots Of Earth offers a modern thrash sound mixed with old school energy. Drummer Gene Hoglan is still at the top of his game. But with a raspy, blown-out voice that has seen better days, I feel it is vocalist Chuck Billy who is the one that shows the most ‘wear’ in the group. I’m not sure if it’s from all the constant touring with no rest but I would suggest taking it easy next year and to get back with a vocal coach.

All that being said, Chuck and co. bring the pain on crushers “True American Hate” and “Man Kills Mankind”. The real star for me is the guitar duo of Alex Skolnick and Eric Peterson. These dudes are among the best in the game. I just love the high speed shredding that you always get when they are paired together. My major complaint is that some of the song structures get repetitive and some of the lyrics are pretty lame. All in all, I feel this CD is worth the buy for sure, but don’t expect a classic or anything even close to that. This band is better than this and maybe on the next album they will deliver something truly worthy of their greatness. Until then, Dark Roots of Earth will surely suffice. 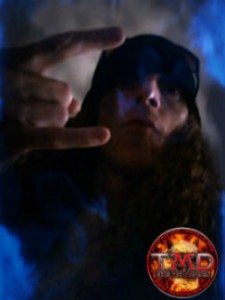