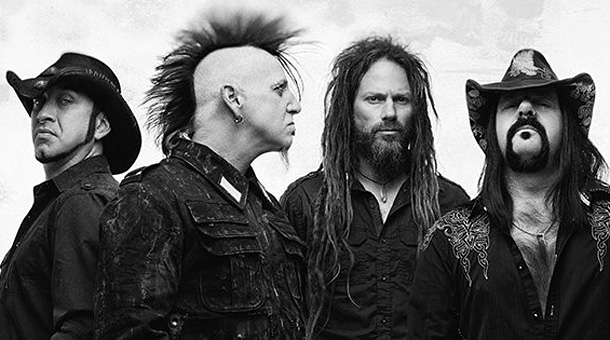 HELLYEAH returns in 2019 with a new sensational studio effort, their sixth overall, titled “Welcome Home,” and it is the last album to feature late PANTERA/DAMAGEPLAN drummer, Vinnie Paul Abbott. That being said, we are all lucky that he completed his drum tracks before his untimely death in 2018. Fans are in for a real treat with this release.

I was pleasantly surprised by how totally heavy this album sounds overall, so it is truly a befitting send off for Vinnie Paul, and Chad Gray’s top notch vocal performance is definitely what helps take the mostly grooving, face pulverizing collection of headbangers to a new level. A lot of fans want to see him back with his original band MUDVAYNE but I can say a lot that you will hear on this album sounds like it could be that band, it is that damn sickening.

“333” jumps out the cage like a wicked beast set forth from beyond, with high speed, blast-beast drumming by Vinnie Paul. While “Oh My God” and “Welcome Home” sound more commercial than the opening hell storm unleashed on your ears, they still totally rattle your head like a stripper that just showed up to your doorstep in nothing but a thong. “I made a deal with the Devil and now the Devil’s in my blood,” sings Gray in the shrieking tone of a lunatic off his medication. “I’m the bullet in the gun.”

I must admit the guitar solo on this bad boy is spot on Dimebag Darrell, so that is another killer homage paid that I bow down too.

Up next is “Welcome Home”, and it’s more of a power ballad really, but Vinnie Paul’s powerful as Hell drumming simply will electrify true fans of metal music. I’m The One” sounds totally different than anything else I’ve heard from this band over the years and is probably one of the better tunes they’ve cut. “You’re going down the rabbit hole…”

“Black Flag Army”, is easily the weakest link on the album, but it’s still a really good song that will make you bang your head, and I can’t hate on that.

“At Wick’s End” is the most pop sounding track but for the love of Christ, it is catchy and will stick with you like a fat, drunk chick after a late night rock gig you just attended on the Sunset Strip. “I am the darkness,” sings Gray. The guitar work by Christian Brady and Tom Maxwell is simply stellar. Kyle Sanders on bass holds down the rhythm section as rock solid as anyone else going in the game today.

However, my personal favorite, “Bury You” is without a doubt the most PANTERA-like for me out of all of the songs, and that includes the totally ass kicking guitar solo. “I’ll bury you alive,” Gray sings in pissed defiance. And the same thing goes for the next track “Boy,” in terms of sounding like Gray’s MUDVAYNE outfit, so I believe that is going to draw a lot of fans to this album like a fly to shit.

The record concludes with “Skyy And Water” and “Irreplaceable”, where at the very end you will hear Vinnie Paul’s voice saying some cool words about how happy he was in his life with his lady and “good times are irreplaceable.” Raise a Black Tooth Grin for both Abbott brothers for all the amazing years of music that they delivered to the masses. Fans of hard rock and metal will definitely want to add “Welcome Home” to their collection, and while it’s sad that this ends a legendary chapter in a music genre that means so much to me and many others, their spirits truly live on each time you play one of their songs, because that is the kind of “otherwordly” soul that was injected into the Abbott’s brand of crafting bad ass songs you can drink and fuck to.