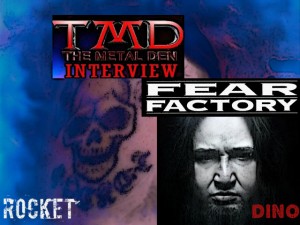 TMD: Who are some of your biggest guitar playing influences?

DINO: Two people, Angus Young… and Eddie Van Halen. Well, Angus, when I was first 8 years old… I mean, that’s what I wanted to do. I wanted to play guitar and perform like Angus.

TMD: Would you say Al Jourgensen has been a big influence on FEAR FACTORY?

DINO: Al was living in Chicago (during the 90’s) and he is in El Paso, Texas now…but yeah, he was definitely a big influence on us.

Listen to the audio interview HERE!