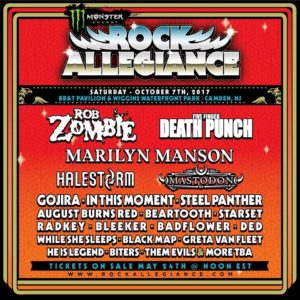 Organizers of Rock Allegiance 2017 have announced the festival’s initial lineup, which can be found below. The event will take place on October 7 at the BB&T Pavilion and Wiggins Waterfront Park in Camden, NJ and the following acts have been confirmed thus far (more will be announced in the coming weeks):

After an unforgettable weekend of rock in 2016, Monster Energy Rock Allegiance returns to the Philadelphia area for its third year Saturday, October 7 with a new festival location at BB&T Pavilion and Wiggins Waterfront Park in Camden, NJ.

The music lineup for the Northeast’s biggest rock experience will be announced Monday, May 22 and tickets will go on sale Wednesday, May 24.

With mouth-watering, Philly-centric food offerings, regional and national craft beer, band meet-and-greets, autograph signings, and more, fans come from around the country to immerse themselves in rock and roll culture at Monster Energy Rock Allegiance.