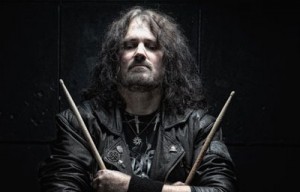 The band has been often compared to sound like Dio, Yngwie Malmsteen, Black Sabbath and Judas Priest. Preliminary work on a new album has already begun, with various songs at different stages of completion. Two new songs ‘End of World’ and ‘Saints & Sinners’ can be heard at http://www.myspace.com/raven-lord or http://www.facebook.com/ravenlordmusic.

Larry’s bio: Lawrence ‘Larry’ Paterson was born in Matamata, New Zealand, drumming by the age of 15 influenced by the sounds of classic hard rock and heavy metal made by bands such as Motörhead, Iron Maiden, Judas Priest, Black Sabbath and AC/DC. Several bands in New Zealand followed until by 1988 Lawrence relocated to the United Kingdom.

Once there he again spent years in several bands of different calibre and levels of achievement, drumming for the likes of thrashers Arbitrater in 1992 when they released the ‘Darkened Reality’ album. For a period of time Larry was ‘official helper and gear carrier’ for Cozy Powell and his drum tech Eddie Naughton during the writing and recording of the Black Sabbath ‘Forbidden’ album. Striking up a friendship with one of his all time drum heroes left an indelible impression on Lawrence; a profound influence of Larry’s playing style and attitude to both music in general and metal in particular.

Larry also authored a book on the Blaze Bayley band’s history entitled ‘At The End Of The Day’, published originally in 2009. This is actually his eleventh book as he has also written ten others about a totally different kind of Heavy Metal: since 2000 he has written non-fiction histories of Germany’s Second World War U-boat service, inspired largely by his lifelong interest in the Second World War and working as a Scuba instructor, diving the wartime wrecks off France.