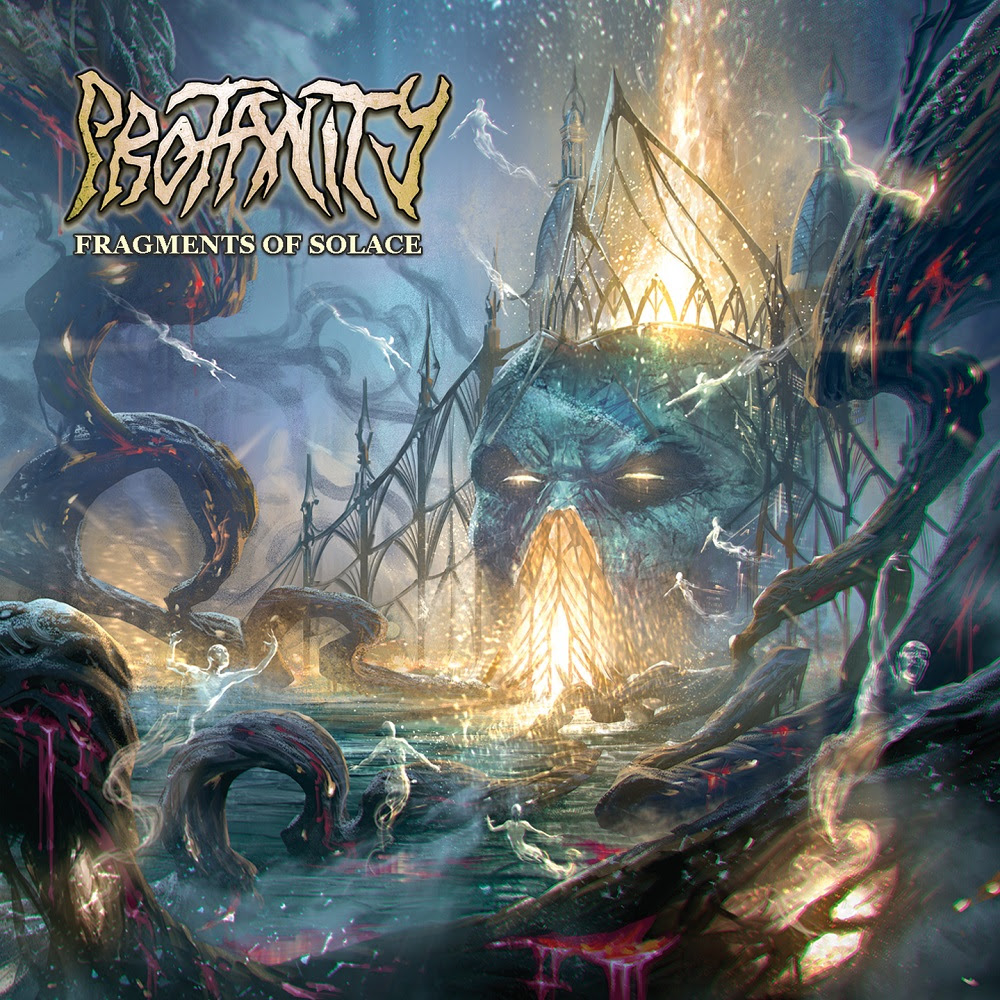 German tech death metal institution PROFANITY are premiering the play-through video for “Ceremony of the Rotten” at THIS LOCATION. The song features SUFFOCATION‘s Terrance Hobbs on lead guitar and is taken from the band’s highly acclaimed latest album “Fragments of Solace”.

For this release the band invited again guests like Terrance Hobbs (Suffocation), Matt Sotelo (Decrepit Birth), Dave Suzuki (ex-Vital Remains, Churchburn), Dima Orlov (Fetal Decay) as well as their ex-bassist Martl Bauer. “Fragments of Solace” was mixed and mastered by Lukas Haidinger in his Deep Deep Pressure studios. The artwork was done by Federico Musetti.
Tracklist:
01. Disputed Territory – 4:52
02. Progenitor of the Blaze – 6:39
03. Reckless Souls – 8:23
04. Where Forever Starts – 9:12
05. Towards the Sun – 4:48
06. Ceremony of the Rotten – 4:38
07. The Autopsy – 2:02

Since 1993, the underground is shaking under the sounds of PROFANITY. The German tech death three-piece set a heavy mark with their albums “Shadows to Fall” (1997) and “Slaughtering Thoughts” (2000) as well as their tour in support of Cryptopsy in 2002 and their appearance at the Maryland Death Fest 2004 alongside Misery Index and Exhumed.
After some years of silence, the band spew out a new sign of live with their EP “Hatred Hell Within” (2014). It was recorded with Christoph Brandes in his Iguana Studios (Necrophagist o.a.).

On April 21st, 2017 “The Art of Sickness” was released. Its title revealed the route of the new material which is full of playfulness and technical brilliance while it strikes a balance between art and insane chaos. Recorded again at Iguana Studios with Christoph Brandes. To make the album even more diverse, the band invited guests like Terrance Hobbs (Suffocation), Adrie Kloosterwaard (Sinister), Ricky Myers (Disgorge, Suffocation), Christian Münzner (Alkaloid, ex-Obscura) as well as their ex-bassist Martl Bauer. The artwork was done by Pär Olofsson who already created images for albums by Exodus, Unleashed, Malevolent Creation. On December 4th, 2020, PROFANITY are returning with a new full-length: “Fragments of Solace”.