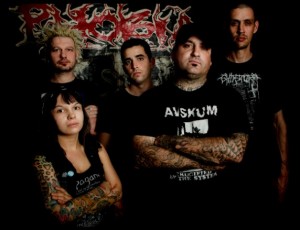 The band also recently disbursed the album’s second track, “Contradiction,” which is slaughtering the lands via Youtube HERE.

PHOBIA will be spreading their hostility throughout North America later this year and will appear on this year’s edition of the Scion Rock Fest, set to take place at the Ritz Theatre in Tampa, Florida alongside the likes of Down, Sleep, Merzbow, Church of Misery, All Pigs Must Die, Ides Of Gemini and more!

In conjunction with the release of Remnants Of Filth, PHOBIA will join forces with power violence insurgents Strong Intention for the The East Coast Filth Tour 2012 set to commence June 3 in Detroit and decimate 9 cities. Check tour dates below.

With 22 notorious years of charged auditory mayhem under their belts, Orange County, California’s grindcore unit PHOBIA will assault humankind with their fifth full-length, Remnants of Filth. Easily one of the most enraged releases in the band’s iconic discography — citing classic releases for the genre via labels like Slap-A-Ham, Relapse, Deep Six, Deathvomit in addition to previous releases with current label home Willowtip Records — Remnants Of Filth surges with eighteen socio-political grind hymns in about as many minutes, produced and mixed by Scott Hull (Pig Destroyer, Agoraphobic Nosebleed) at Visceral Sound Studios in Bethesda, Maryland and engineered by Mike Harrison at Winter Skies Productions in San Antonio, Texas.