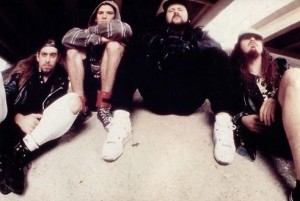 A: With Pantera, there was, in my very young mind, this big yearning to cross what I was enjoying about hardcore and thrash metal and speed metal at the time, where melody kind of went out the window, but still there was a power there. With Down, this is the type of band where, 99-percent of the time, I have to be in key when I’m singing. So, I can’t really rely on a bunch of screaming, but when I do it…I’m kind of thinking a little bit of James Brown. To me, Down is a slippery, soulful, almost bluesy metal band. Even Pantera was bluesy a whole lot of times in the riffing.

Q: We like to think of Pantera as the blues on steroids.

A: I totally understand that. I really do. As far as our influence that we left on the world, the easiest thing to grasp would be the chugging parts of our music…but a lot of people failed to realize that there were bluesy parts in there.

Q: There have been rumors floating around of a Pantera “reunion” with Zakk Wylde. Is that real, and would that include you?

A: Well, it would better damn well fuckin’ include me, or it wouldn’t be Pantera. I talked to Zakk about two weeks ago, and he’s very open for it. He’s got an open mind about it. But, truth be told, Vince [Abbott] has got a grudge against me that is really unfounded. And, honestly, I’ve always had a wide-open door when it comes to Vince.

If it takes me standin’ there and lettin’ that little guy punch me in the fuckin’ face repeatedly, over and over and over, til his hands were tired of hittin’ my rock-hard fuckin’ head, as long as we could sit down and talk afterwards, I’m all for it, man.

Q: Would there be any issue with someone else playing Dimebag’s guitar parts?

A: Well, now, I didn’t say that the Pantera thing is a realistic thing. I don’t think that’s the important thing. I think what the important thing is, what Zakk and I discussed, is just Vince actually dropping his guard and realizing there is no treachery afoot.