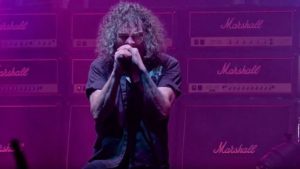 Jimmy Kay from Canada’s The Metal Voicespoke to Bobby “Blitz” Ellsworth frontman of US thrashers OVERKILL, who spoke about their new Live In Overhausen multi-format release, which will be released on May 18th via Nuclear Blast. Blitz also gave an update and timeline on the new upcoming Overkill studio album. Check out the chat HERE.

About the Live At Overhausen concert:

Ellsworth: “We wanted to make it interesting, this represents us, so we were hands on from the initial idea, through the final mix, through the editing of the DVD. There are interviews in the DVD with the band members. We were on board with all of the production stages of this DVD and these ideas and decisions flowed through the band not from outside sources, so that’s what makes it more prideful. Choosing the lights, choosing how many the amplifiers, choosing the venue, approving back drops, approving video cuts and audio mixes. So I think the pride in this is the key word. ”
Why the live album includes both Feel The Fire and Horrorscope albums played in their entirety?

Ellsworth: “Obviously there were anniversaries for both of them, Feel The Fire being 30 years and Horrorscope being 25 years. The internal thinking was choosing two albums because other bands choose just one. The name of the band is Overkill, it means more than necessary. We were not trying to recreate history or to present nostalgia. Today this is a different band from the past, with different chemistry Dave Linsk (guitar) flies up and down that fret board, Derek Tailor (guitar) is tight as well, Eddy Garcia sat in on the drums. It was modern presentation for nostalgic songs.”

Update on the new album:

Ellsworth: “I think we caught a wave on the last four records part of that wave was Ron Lipnicki behind the drums and now he is now gone, so now I don’t know what to expect. The beauty of it is that when you are inside the writing team that’s what becomes motivational. Obviously the new album is going to be a Heavy Metal record we don’t deviate so much from our formula but what is that record going to sound like? At this point it sounds like a Metal record to me. Jason Bittner (Shadows Fall, Flotsam And Jetsam) addition to the band as the drummer is going to make it bombastic in some cases he is the state of the art when it comes to hitting the skins. So I really think that we have an opportunity here to make something here that is great. I’m not going to say out do anything but who knows it can be a new chapter of Overkill. February 2019 is what we penciled in then we can tour starting March 1st, 2019. February is what we are looking for, that means we will start the drums tracks next month.”

When asked how much of the songs of the new album are completed:

Ellsworth: “There are ten songs that have been written and they are all up for change. The way we kind of write is it evolves from the riff and then it becomes a song, it then is arranged and it shifts and changes and I start tearing into it. So I am going to say that 90% of the music and writing is done but we are going to fuck around in each song 10% of so to adjust things to make it better to have it fit better. When it comes to lyrics I don’t write lyrics to begin the songwriting process. I use phonetics, I use none sense, I take paragraphs out of books and I start fitting them in. I am more concerned with the vocal line, so the lyrics are topic less when I start. At this point I would say 50% of the new songs have solid ideas for lyrics.”