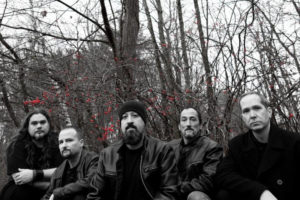 New Hampshire-based ONERA will play a duo of shows in New England this week supporting their recently-released debut EP, Olde.

Though the entity of ONERA is very new, the outfit unites a team of veterans from a wide array of revered acts including Morgion, Keen Of The Crow, Cortez, December Wolves, Watchmaker, and others who have been active in the scene for several decades. In September 2015, ONERA entered Amps vs Ohms in Cambridge, Massachusetts to capture their debut recordings. The members’ cumulative resumes and influences intertwine and carve out a unique sound for the band. Mastered at New Alliance East, the three-song Olde EP presents just under thirty minutes of glorious doom metal rapture, rife with heavy, melodic, dynamic, and progressive elements which help create an intense, organic, and primeval aura.

ONERA will take the hymns from the EP to audiences in Rollinsford, New Hampshire this Friday, July 29th, and will then play Salem, Massachusetts on Saturday night. Additional runs of regional live dates across the Eastern US will follow in the coming weeks as the band continues to promote their new works.

The band is currently working on a video for one of the songs from Olde, which will be produced in the coming weeks. Stand by for more updates from ONERA shortly.