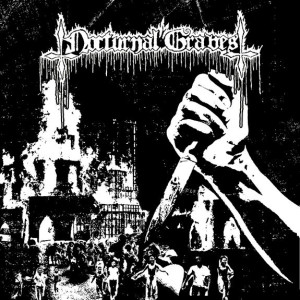 Australian black/death band NOCTURNAL GRAVES have announced plans for a first-ever North American tour. This will culminate with an appearance at Maryland Deathfest at the end of May.

A statement from the band reads: “Come May 24th, Nocturnal Graves will light a blazing, black fire under the hills of LA before trekking cross-country to violate Philadelphia with a storm of wild, untamed, vicious black/death metal. Then the band will move on to Baltimore to desecrate the Edison Lot Stage alongside Venom, Destroyer 666, Denouncement Pyre, Desaster, and Satan. We are proud to announce our first-ever Stateside shows and look forward to spreading our Australian Wildfire to those in attendance! Die in Fire!!!”

During this exclusive Stateside trek, Nocturnal Graves will be selling a special 7″ EP, pressed by Hells Headbangers. Entitled “Lead Us To The Endless Fire/Sharpen The Knives,| the 7” EP will feature two brand-new songs and will be strictly limited to 200 copies.