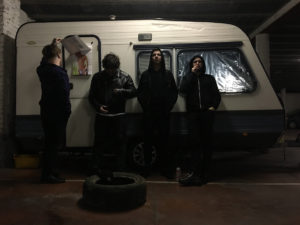 “Void”, the debut album from NECRODANCER, can be streamed in full and downloaded for free HERE. Formed last year by members and ex-members of Verdun, Daggers and Death Mercedes, the band plays an amalgamation of noise rock, punk, sludge and black metal. This ten-tracks debut release was recorded and mixed last summer in Laval by Amaury Sauvé at The Apiary (Birds In Row, Plebeian Grandstand, Death Engine) then mastered at Audiosiege by Brad Boatright (Okkultokrati, Nails, Full Of Hell).”Void” is due out February 10th via Throatruiner Records and Lost Pilgrims Records (with US distribution by Deathwish Inc) on vinyl and CD, pre-orders are already available from the labels.

NECRODANCER doesn’t waste time with warning shots and directly introduce themselves to the world with “Void”, their debut album. Formed in 2016 between Paris and Liège by members hailing from various corners of the heavy music realm (Verdun, Daggers, Death Mercedes, Radio Maquis…) the band establishes with “Void” an already personal, hard-to pin sound. Drawing as much from swampy noise rock as from the punkier edge of later-era Darkthrone, these self-proclaimed funeral grungers are as comfortable with surprisingly catchy melodic hooks as with remorseless crust assaults. Recorded and mixed by Amaury Sauvé (Birds In Row, Plebeian Grandstand, Death Engine) then mastered by Brad Boatright at Audiosiege (Okkultokrati, Nails, Full Of Hell) for maximum damages, NECRODANCER’s firepower will be hard to ignore.